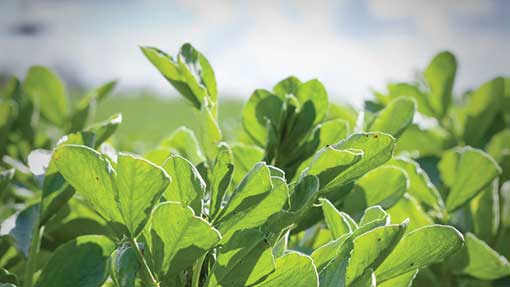 The NFU has welcomed the government’s decision to allow nitrogen-fixing crops to count towards greening measures under the new CAP rules.

But NFU president Meurig Raymond described the decision as a “sensible compromise” for farming and the environment.

“Today’s news means more choice for farmers, less land taken out of production as well as achieving a clear and positive benefit for the environment,” he said.

Under the new CAP rules, from 2015, farmers are required to implement greening measures, or they will lose their Basic Payment Scheme (BPS) payment.

Nitrogen-fixing crops were included in a list of five options available to farmers in England to comply with EFA requirements. The others being land lying fallow, catch and cover crops, buffer strips and hedges.

Mr Raymond said: “While many will be disappointed that all landscape features won’t count from year one of the CAP, there will be some relief that nitrogen-fixing crops such as peas and beans will help.”

And Defra has confirmed that no additional management restrictions will be applied on the use of areas used for growing nitrogen-fixing crops to meet EFA requirements in 2015.

The NFU described the inclusion of hedges in the EFA list as an “important and pragmatic decision”.

But Mr Raymond warned farmers who choose to include hedges in their EFA options faced “higher risks of inspection, delayed payment and possible penalties”.

“We understand the RPA [Rural Payments Agency] is now commissioning work to digitise hedgerows to the required commission standard,” he added.

“I’m urging ministers that the RPA completes this mapping work as swiftly as possible.

“But I don’t want the mapping to stop with hedges; we need all landscape features to be available to farmers.”

But the RSPB described Defra’s announcement on CAP implementation as a “poor” deal for English farming and a “wasted opportunity for the environment”.

RSPB conservation director Martin Harper said: “The government has squandered this opportunity and is handing out £11bn to the farming industry in England and expecting very, very little in return.