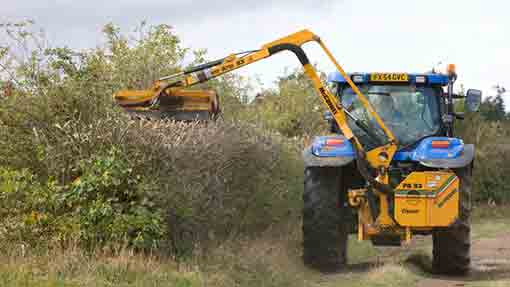 A derogation to allow farmers in England to cut some hedges in August is being considered as part of the new CAP reform package.

Defra said it was working on a derogation which would allow hedgecutting in “prescribed circumstances” during August for farmers who “intended to sow oilseed rape or temporary grass during the month”.

If approval were given for the derogation, it would be reviewed after one year so its impact can be assessed.

Former Defra secretary Owen Paterson announced at the Cereals event in June that farmers in England would be banned from cutting hedges in August from 2015 to protect nesting birds, as part of EU legislation.

The ruling means from next year onwards it will be illegal for farmers to cut hedges in the five month-period from 1 March until 31 August.

The NFU and farmers slammed the decision and said it would add further pressure to them at harvest, the busiest time of the year.

They raised concerns that it would disrupt oilseed rape cultivation because farmers would not be able to get on to their land to trim hedges before they sowed their crop.

The NFU welcomed the news that Defra recognised thepractical issues created by the ban on hedgecutting before 1 September.

NFU vice-president Guy Smith said: “August is a busy time of the year for many farmers. There needs to be a simple derogation process that is quick and easy to apply for and implement.

“The challenge remains the same – the reduced cutting window would force farmers to access fields after planting, with potential knock on effects on soil compaction and water run-off.”

But he added: “Many recognise the fact that this round of CAP has added complexity and additional administration. Regardless of how the derogation is implemented, it adds to the extra burden that farmers will face in 2015.”

In its third leaflet on CAP reform, published on Tuesday (28 October), Defra said more details about the derogation would be available soon.

Meanwhile, more details have emerged about the definition of a “hedge” to qualify under Ecological Focus Area (EFA) rules, which would be “the same as it is for cross compliance”.

To count as an EFA feature, a hedge needs to be on or “next to” eligible arable land. The minimum length for a hedge is 20m and there is no minimum or maximum width or height.

To apply for the new Basic Payment Scheme (BPS) and to receive BPS entitlements, a farmer must be an “active farmer”.

A farmer who received €5,000 (£3,940) or less for the previous scheme year – before any penalties were applied or cross compliance reductions were made – for either Single Payment Scheme (SPS) or BPS, will automatically qualify as an “active farmer”.

Farmers will qualify as an “active farmer” unless they operate any of the following non-agricultural activities: airports, railway services, waterworks, real estate services, permanent sports and recreational grounds.

But farmers who operate any of the above activities may still qualify as active farmers if they can demonstrate they are carrying out “significant agricultural activity”.

Where a claimant operates one of the excluded activities, but this is a separate business from the farming operation, this should not jeopardise their claim. However, they may need to demonstrate that the businesses are operating separately.

Details on who qualifies as a young farmer have been clarified, including how they must demonstrate that they have control of their farming business.