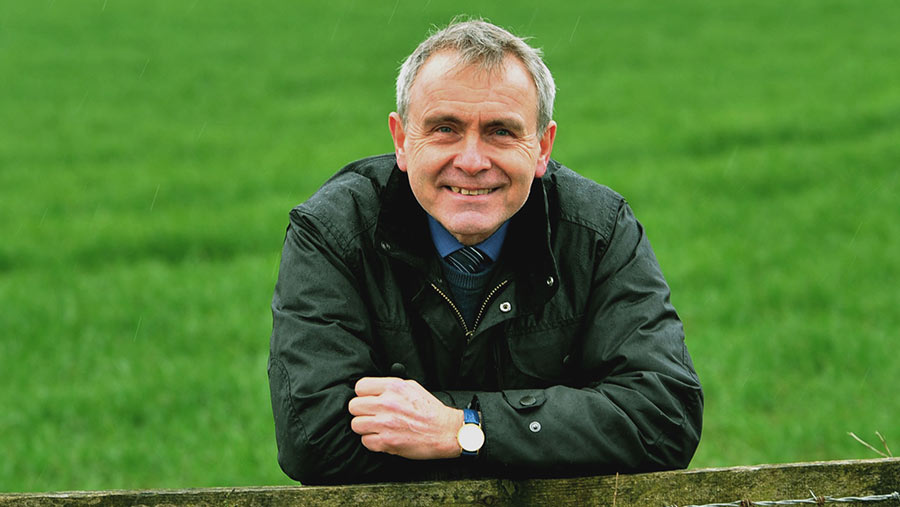 Defra minister Robert Goodwill has proved hard to pin down since his appointment two months ago. But he has finally granted his first interview to the agricultural media.

We get his views on a range of topics currently affecting farming including climate change, red meat consumption and shooting licences.

Agriculture is getting a lot of flak over climate change at the moment. How should UK farmers best go about reducing greenhouse gas emissions?

Producing good quality food and at the same time delivering on net-zero carbon is going to be a particular challenge.

But part of the way we can deliver that is through environmental land management – looking at carbon sinks, forestry and more sustainable methods of farming.

What is absolutely clear is that climate change is an issue we need to face up to and in every single sector of the economy – not least agriculture – we need to play our part in reducing carbon emissions.

Does that mean we eat less red meat and rear fewer livestock?

No. I think a lot of people have a different agenda in terms of reducing the amount of meat that is consumed.

In my part of North Yorkshire, we have a lot of land that is not suited to growing aubergines or even wheat and barley.

The uplands of our country are well suited for producing good quality beef and lamb. I consume as much as possible of it myself.

If we want to manage our uplands in a sustainable way to deliver the public good that people see, part of that is using grazing livestock.

We need to look at how, for example, we can feed cattle in a way that produces less methane and how we can make livestock production more sustainable.

But using our uplands and grazing as part of rotational farming is part of the solution and not part of the problem in my view.

Can we meet the net-zero target without reducing UK livestock production?

We will have to see how trends change. Whether we produce red meat, pork or chicken depends on whether people want to buy it.

If people are demanding good quality beef produced in this country, then we need to do that in the most sustainable way possible.

What we wouldn’t want to do is prevent beef production in the UK and then buy it from Brazil. We have already had that in terms of biofuels.

People in the Far East and South America are chopping down rainforests to produce biofuel, which is meant to be a green solution.

We need to avoid the law of unintended consequences. I firmly believe that beef, dairy and sheep production is a vital element of British agriculture and we should support the production of good quality, healthy food which people enjoy.

Will you be carrying out an investigation into how Natural England came to revoke the general shooting licence with just 36 hours’ notice for farmers?

Yes. We are very concerned about the way this has unfolded and the way Natural England may have acted. We need to fix the problem and fix it quick.

A lot of farmers have been concerned that they can carry out pest control activities as they have done for many years.

We need to look into exactly what happened – why the legal basis on which these general licences were issued was, it seems, flawed.

It is very important that as quickly as possible we can restore the situation as it was so farmers, gamekeepers and other land managers can control these predatory birds because it is important that this type of pest control can continue.

What is your response to the suggestion that the pilot seasonal agricultural workers scheme should be expanded to meet farmers’ concerns over labour shortages?

The pilot scheme for 2,500 workers who can come for six months is operating this year and next year. If it is a successful scheme there is no reason why we can’t work together with the Home Office to ensure we can expand that scheme.

There are a number of reasons why we maybe don’t have so many – partly because of the messaging that went out after the referendum vote but also the weakness of sterling has meant that overseas workers might find they are better off working elsewhere.

But under whatever Brexit scenario we have, there will be opportunities for EU workers to come and work in the UK. In a no-deal situation, EU workers will be able to come for three months initially and then apply to have their status regularised so they can continue to work.

How do you plan to rebuild confidence in Defra among farmers – including unpaid support payments?

Basic payments this year have gone much more smoothly than in previous years. We’ve done tremendously well this year. he bad news is that on the stewardship schemes we have not performed as we should have done.

Natural England were administering the scheme and we took it away from them on 1 January and gave it to the Rural Payments Agency.  am optimistic that things will improve dramatically – and they need to if we expect farmers to sign up to these schemes in future.

Stewardship schemes require farmers to make investment. If we are going to encourage farmers to sign up to these schemes we need to do better – and I have made it absolutely clear that we have fallen short of what people expect, including processing applications as well as payments.

National Trust tenants are frustrated that they are being prevented from participating in badger culls to combat bovine TB. What is the latest on that situation?

The National Trust apparently say they have been advised by experts about this. I would be interested to know who those experts are – are they vets, epidemiologists?

Have they published any scientific papers or have they given in to pressure from, in many cases, uninformed people?

We are all keen to see not only healthy livestock but healthy badgers as well. This is a disease that inflicts suffering on the badger population as well as on cows.

The badger cull is starting to work – bovine TB cases are coming down slowly.

I would be very pleased if the National Trust would look at all the science and the most recent evidence.

I would urge them on the basis of that evidence to change their position and allow farmers who are tenants on National Trust land to participate in this scheme.

The Agriculture Bill is taking a long time to make its way through parliament. Are you satisfied with its progress?

We need to make sure when we start the progress of the Bill again that we don’t undo the work that has already been done.

Because if we were to start the process and parliament was prorogued, we could lose everything we’ve got so far.

As soon as it becomes clear when the parliamentary session will end, either we can get the bill through before that or carry it over and then make progress as soon as possible afterwards.

But we do need to get the Agriculture Bill on to the statute books so we can deliver the new way of supporting agriculture which will be tailor-made for UK conditions rather than a one-size-fits-all European policy which I know has frustrated many farmers.

Who is Robert Goodwill?

A Yorkshire farmer and Newcastle University agricultural graduate, Robert Goodwill believes his background makes him well-suited to his role as Defra minister.

“When I got this job, it was like putting on an old jacket from the back of the wardrobe – it felt like it fitted,” says the MP for Whitby and Scarborough, whose family have farmed on the Castle Howard estate near Malton since 1850.

The 100ha family farm is run on a “very simple system” revolving around combinable crops, he adds.

One of the main diversifications is Mowthorpe UK – a green burial ground offering environment-friendly funerals in the countryside.

Speaking of his appointment as Defra minister on 5 March, he says both farmers and non-farmers seem pleased he has an understanding of agriculture.

“I am enjoying it,” he adds. “While sometimes people are criticised for being appointed when they are involved in a particular industry, nobody has said ‘it’s terrible that you’re a farmer – you have a vested interest’.”