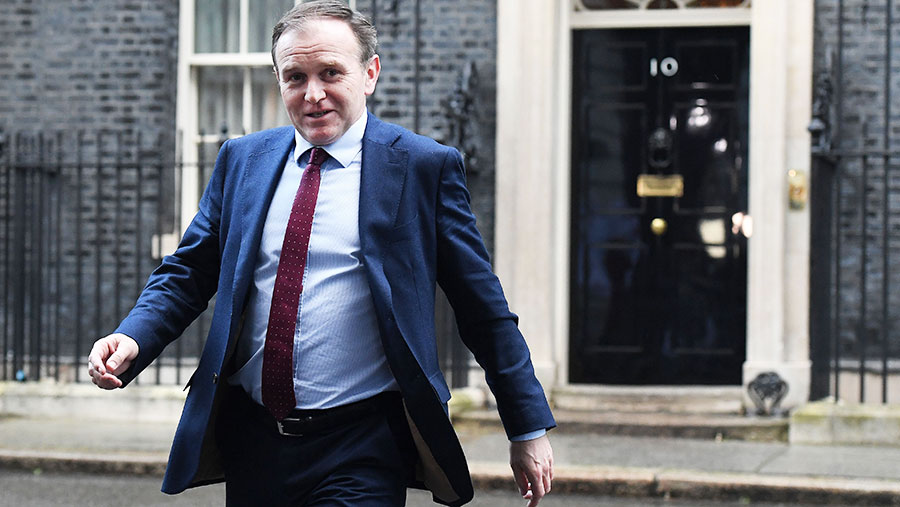 Farm minister George Eustice has been promoted to Defra secretary after Theresa Villiers was sacked from the role.

Mrs Villiers was dismissed in a Cabinet reshuffle on Thursday 13 February – making her the shortest-serving Defra secretary since the post was created in 2001.

A much longer-serving minister, Mr Eustice has been at Defra since 2013 – apart from five months last year when he resigned from Theresa May’s government.

He was reappointed to Defra last summer after Boris Johnson replaced Mrs May as prime minister.

Now in the top job at the department, Mr Eustice will be responsible for implementing the policies he helped draw up for UK agriculture outside the EU.

It includes the phasing out of direct payments – which will be replaced with a new system largely based on rewarding farmers who undertake environmental measures.

The Environmental Land Management scheme will pay farmers public money for public goods, including mitigating climate change and increasing access to the countryside.

Mr Eustice, who campaigned for the UK to leave the EU, took the government’s Agriculture Bill through its Second Reading in Parliament last week.

“For the first time in almost half a century, politicians in Westminster will have the freedom to press ahead with plans to develop a new agriculture policy,” he said.

“Just over six months ago, I was delighted to be invited by the Prime Minister to return to government after three years on the backbenches.

“This morning, he told me that I need to make way for someone new.”

Mrs Villiers said she was deeply grateful for having the opportunity to serve twice at the highest level of UK government, initially as Northern Ireland secretary.

She added: “I tackled both roles with passion, commitment, and huge amounts of hard work.”