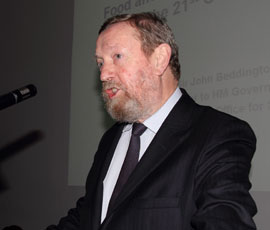 Genetically-modified crops could play an important role in helping prevent a future global food crisis, according to the government’s chief scientific adviser.

Sir John Beddington said he saw no safety reasons for opposing GM crops, provided they were rigorously checked for their impact on health and the environment.

Prof Beddington said: “If you’ve got a serious problem, which in conventional mechanisms or plant breeding or other techniques you can’t address, which a GM organism can, and it is properly tested for environmental or human health impact and is appropriate, I can’t see any reason why you wouldn’t use it.”

Addressing the health concerns over GM crops, he said that more than one trillion meals have been made using GM crops in North America and there has not been a single case in the law courts of anyone suing after eating GM products.

“America is probably the most litigious society since Seneca’s Rome, but I think there is interesting indirect evidence that this is not a problem,” he said.

Prof Beddington, an applied population biologist at Imperial College London, said GM crops were being used in large parts of the world, with the notable exception of Europe where many held the view that they were “intrinsically wrong”.

He said the challenges of feeding a growing world population, alongside climate change and water shortages, were so intense that we no longer had the luxury of ignoring the value of GM crops to address agricultural problems.

Speaking at the Royal Agricultural College in Cirencester on Friday (20 January), Prof Beddington paid tribute to the “very exciting” work at Rothamsted Research, including research into how to attract parasitic wasps which repel crop enemies and wheat which sends out an alarm to repel aphids.

But he acknowledged that GM crops were not a “silver bullet” that provided a solution for every agricultural problem and more work was also needed to improve conventional farming practices.

“Scientific breeding and improvements in agronomy have boosted averaged wheat yields in the UK to around 8t/ha,” he said.

“By understanding the genome of wheat we can improve productivity. Scientists at Rothamsted reckon they can achieve 20t/ha by 2020 by a mixture of things – genotype improvement, mitigation of pests and diseases, soil root interactions.”

Prof Beddington, who previously raised the concept of the “Perfect Storm” of food, energy and water security in the context of climate change, said agriculture needed to adopt a system of sustainable intensification to meet the requirements of an increasing global population, which the UN estimates will rise 1bn to 8bn by 2025.

Moving farming communities closer to people’s home and applying fertiliser in granules instead of other more harmful ways were good examples of a sustainable system, he added.

“We are looking at a massive urbanisation and urban environments are vastly vulnerable to famine and water shortages,” he said.

“The rural environment in a sense has the capability of self-sustainable living – more resilient to threats from changes in weather and so on.

“The challenges are going to be how the rural community can produce enough food and release enough water to ensure that cities are resilient and sustainable.”

He said aquifers across the world were becoming increasingly depleted and the prospect of future water shortages was a “real concern” for agriculture.

Eliminating food waste, which is an acute problem in developed countries, was also critical, he added.

“In the UK, about 30-40% of food is lost pre-harvest and another 30% is lost post-harvest after we purchase food

“There is significant loss due to pests and diseases, but that 30-40% taken together is something we could address to increase agricultural productivity.”