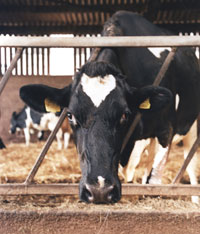 Farmers are reminded with the close of the Older Cattle Disposal Scheme (OCDS), all cattle born before 1 August 1996 will have to be disposed of as fallen stock.

The OCDS closed on 31 December 2008, which means that from 1 January 2009 there is no longer compensation available for the disposal of cattle born or imported into the UK before 1 August 1996.

Pre-1996 cattle are also subject to BSE testing under current legislation. And until 11 January 2009 the free fallen stock service will operate for cattle that have died or been killed on farm. BSE testing of eligible fallen stock (which from 1 January will include all pre-August 1996 animals) will continue to be free of charge.

From 12 January 2009, arrangements for the collection, disposal and testing of all pre-1996 cattle must be at a cost to the producer.

Failure to ensure correct testing and disposal of pre-1998 animals is an offence under the TSE regulations.