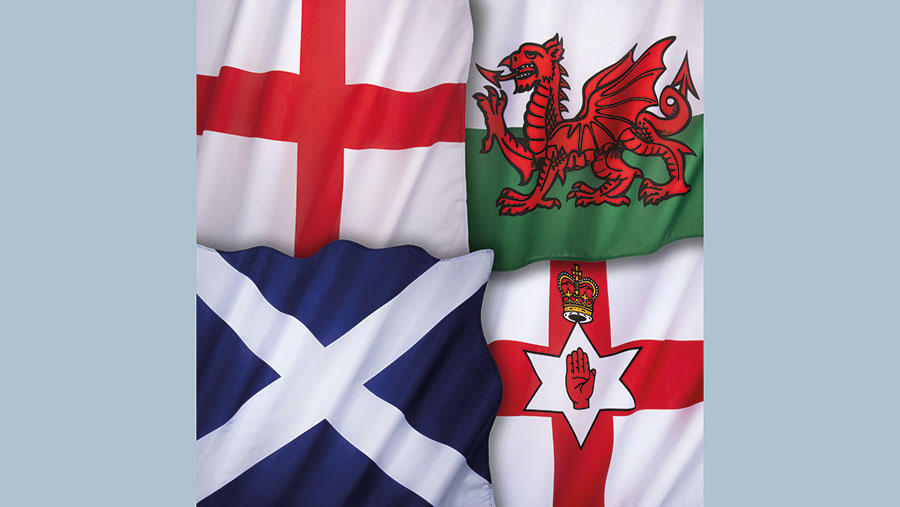 As farm support policy between the devolved nations diverges further, imbalances in competitiveness may develop. An important policy driver is the UK government’s aim to reach net zero emissions by 2050.

Wales and Scotland are yet to give more detail on plans ahead, but are also likely to link support schemes and the environment.

See also: 8 key drivers of change in farming highlighted for 2022

Policy reform in England is progressing quickly. The seven-year Agricultural Transition has begun alongside reductions to BPS payments, the first in a series of annual cuts through to 2028, when BPS will disappear.

Falling support payments are expected to be delinked from land occupation, and farmers wishing to exit the industry may be able to take future payments as a lump sum. Defra is expected to publish scheme rules imminently.

It continues to work with farmers and stakeholders to design the Environmental Land Management (ELM) scheme, which will replace BPS.

The broad scope of the three components are clearer since last year’s Outlook, says Caroline Ingamells, business research consultant with The Andersons Centre.

The Sustainable Farming Incentive should be accessible to most farmers. It will consist of “standards”, with most having three levels – introductory, intermediate and advanced. All BPS claimants will be eligible to enter the start-up ‘SFI 2022’ before the full scheme launches in 2024.

The Landscape Recovery Scheme concentrates on long-term landscape and ecosystem recovery through projects such as large-scale woodland planting, peatland restoration, and coastal habitats. Ten pilot projects will be funded from 2022-24.

Most funding will be channelled through ELM, although some schemes will be available during the early years of transition to help offset loss of BPS and to improve agricultural productivity.

These include the Future Farming Resilience Fund, offering fully funded advice from accredited advisors, the Farming Investment Fund for grants on equipment deemed to improve productivity, and the Slurry Investment Scheme which will help fund storage improvements.

Other funding will be available via the Farming in Protected Landscapes scheme, initiatives in skills and training, and a new entrants scheme.

The landmark Environment Act finally became law in November. It will enable government to create powerful new laws to protect the environment, including the commitment to reach net zero emissions by 2050, and to halt species decline by 2030.

The second part of Defra’s National Food Strategy has been published and could result in a Food Act with implications for UK farming. Government has said it will respond with a Food White Paper within six months.

Major changes to support have been deferred in Wales. While there is now a roadmap for policy change, the BPS will remain unaltered until 2023.

The BPS could last longer, given the new Sustainable Farming Scheme (SFS) is not scheduled to start until January 2025, and a phasing out over several years seems certain.

An outline of the SFS will be published in spring 2022. Also, the Agriculture bill, which will give the government powers to enact the new schemes, will be placed before the Senedd.

The bill will focus mainly on future support, but also cover small changes to the farm tenancy regime and introduce new National Minimum Standards for Agriculture.

Existing Glastir agreements will be extended until 2023, as will the Farming Connect programme. The latter scheme provides a great opportunity for businesses to consider their future direction, which will help them prosper in tougher times that are likely to lie ahead.

Confirmation this year that the whole of Wales would be designated as a Nitrate Vulnerable Zone will result in some costly requirements to upgrade slurry stores.

This brings in to question the viability of relatively low-income enterprises, particularly beef units, which may prompt a shift towards sheep production on some farms.

Scotland’s farming industry has assurances that current support schemes and funding levels will remain in place until 2024.

While this provides stability in line with Scottish government policy, it can also be argued that it prevents business change, especially coupled with the high prices seen in many sectors at present.

However, given the sweeping changes that have already been implemented in England, the direction of travel becomes obvious for Scottish farm businesses.

The recent co-operation agreement between the SNP and Scottish Green Party, resulting from the former’s lack of an overall majority in the May election, suggests Scotland’s agricultural policy will be more focused on environmental outcomes.

Climate change is high on the agenda within government and part of future agricultural policy is likely to be linked to its mitigation.

Farmer-led groups in each sector have reported on ways the industry can help do this and a full consultation on the proposals, and the provision of more detail, is expected during 2022.

During 2021, the Agri-Environment Climate Scheme opened up once again, but applications were highly restricted.

The recent announcement of a full reopening in 2022 through to 2024 is welcome. However, clarification is still needed on the funding levels and the treatment of agreements due to end this year.