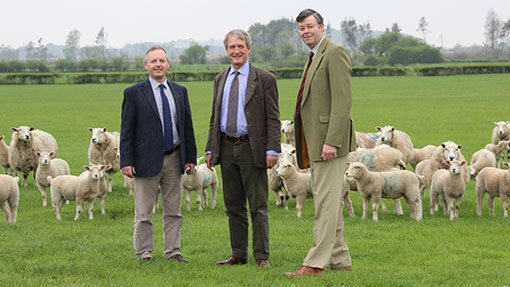 The National Sheep Association (NSA) played host to the minister’s trip to the Lake District on Thursday (1 May).

Cumbria will be one of the areas of England that will directly benefit from DEFRA’s recent announcement that Pillar 1 payments on moorland will rise to £56/ha from next year, an increase of 90% .

NSA chairman Phil Stocker said he was delighted that DEFRA had decided to increase the payment to moorland areas, adding that farmers would “directly benefit from this higher payment”.

“The shift in this direction provides recognition that farms in less favoured areas (LFAs) provide a whole raft of public goods alongside the core activity of food production,” said Mr Stocker.

“We would have liked to see more progress in this area, with payments being targeted to land where active grazing and farming activity is being carried out, but it is definitely a step in the right direction.”

But Mr Stocker added that the lift in moorland payments could not detract from the general downward pressure on direct payments (Pillar 1).

Therefore, the NSA said it saw the day as an opportunity to talk to Mr Paterson about Pillar 2 and the Rural Development Progamme for England (RDPE).

The emphasis was on ensuring this pot of money would be targeted at farmers to increase productivity and competitiveness, while also improving resource efficiency and reducing greenhouse gas emissions.

“The shift in this direction provides recognition that farms in less favoured areas (LFAs) provide a whole raft of public goods alongside the core activity of food production.”
Phil Stocker, NSA chairman

NSA has developed the concept of an animal health scheme under Pillar 2 that does just that, by financially incentivising sheep farmers to tackle endemic disease relevant to their individual farming business, therefore reducing losses and producing more food with less inputs.

Within the Pillar 2 framework, Mr Stocker urged the minister to adopt a “more equal equal balance between environmental projects and resource efficiency within food production systems”.

And he said Mr Paterson appreciated the NSA’s stance on this issue, adding there was a “lot of common ground” on production, profitability and environmental enhancement “running hand in hand”.

Mr Paterson also spoke about the role of agriculture and rural businesses in strengthening the UK economy and, in order to reward good practice, he wanted the government to be able to step away from bureaucracy and allow businesses to move forward.

Lyth Valley sheep farmer John Geldard, NSA chairman and host farmer for Mr Paterson’s trip, said: “The secretary of state must be congratulated for his strong convictions and clear vision that agriculture is a vital part of our country’s economy.

“But for us to continue to grow our export market we must see a relaxation of the [transmissible spongiform encephalopathy] TSE rules that devalue British lamb by giving the impression that we split carcasses in the UK because of disease presence.

“There is no evidence of risk and the continuing need to split carcasses of old season lambs adds unnecessary cost and reduces export potential.”

Mr Geldard went on: “With the world population growing we also need to increase output. We have seen some recovery of the UK breeding flock but long-term sustainability or growth will only be possible if common sense is introduced into our burdensome sheep identification rules.

“Mr Paterson picked this up very strongly and even asked us what tolerance we would like introduced. We think 5% tolerance is entirely appropriate when you look at the level of risk and the capability of the equipment and systems we have.

“Now is a time of opportunity and it was very heartening to meet with the secretary of state and find common ground when discussing the huge potential within the sheep sector.”