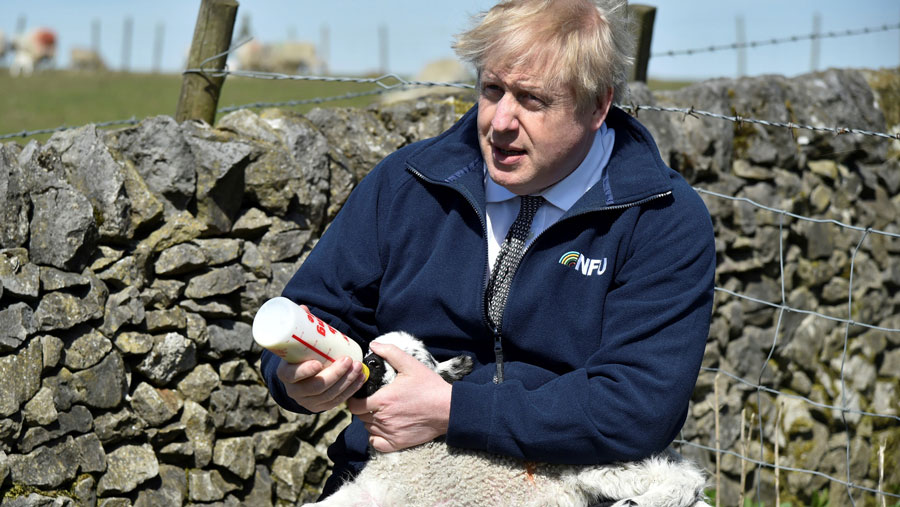 Farmer support for the Conservative Party has slipped dramatically in recent months, as has prime minister Boris Johnson’s appeal, according to the latest Farmers Weekly Sentiment Survey.

Conducted every year, the survey seeks to “take the pulse” of the industry, checking how farmers view the sector from a financial, political and emotional perspective.

This includes the question: “Who would you vote for if there was an election tomorrow?”

Normally, this question yields a predictable result. In 2017, for example, just ahead of the general election that year, it suggested that 72% intended to vote Conservative, with 10% opting for Labour and 8% for the Liberal Democrats. When asked the same question in 2020, the findings were almost identical.

But the latest survey, conducted in November 2021, shows a significant slump in support for the Tories – to 57% – while Labour and the Lib Dems have both benefited (see “Share of the vote”).

Commenting on the findings, Worcestershire dairy farmer Michael Oakes said he was not surprised by the downswing. “The government reaps what it sows,” he said.

“It has sold farmers down the river on occasion and seems quite happy to just import food. We don’t feel they are by our side.”

East Yorkshire pig producer Kate Morgan said the government had shown “a huge lack of knowledge” about farming this past year and had not responded quickly enough to the crisis affecting her sector and others.

“Boris Johnson’s comments on the BBC’s Andrew Marr Show were the nail in the coffin. The fact he made a joke of the plight of pig producers was disgusting,” she added.

According to Chris Curtis, a senior researcher at political polling agency Opinium, the swing among farmers is just a more exaggerated reflection of what is happening nationally, with Labour recently overtaking the Conservatives in the polls.

“The Conservatives have actually been losing support since May, due to lack of trust in their handling of the economy and disenchantment with Boris Johnson,” said Mr Curtis.

“The scandals of more recent weeks mean lots of voters have lost faith in the Conservatives.”

Mr Curtis was adamant this would be of concern to the Conservative hierarchy and that the rural vote did matter.

“A lot of the marginal seats that will be up for grabs at the next election are either rural, or have a significant rural element to them,” he said.

“Also, farmers are one of the most respected sectors of society, and if farmers are going around saying the government is failing them, that may also damage the Conservative brand in the eyes of the wider public.”

One of the key factors behind the slump in support for the Conservatives is farmer disaffection with prime minister Boris Johnson, with the survey coming soon after his ill-advised comments about pigs on the BBC’s Andrew Marr Show and the completion of the New Zealand trade deal.

Asked in 2020 to name a politician who has impressed them the most, Mr Johnson led the pack, with 22% of farmers giving him the thumbs up, followed by chancellor Rishi Sunak, then Labour leader Sir Keir Starmer.

This year, however, Mr Johnson’s popularity has waned, with just 14% of farmers citing him as “impressive”.

Farmers were also asked to name the politician who has annoyed them the most. Last year, Mr Johnson led the pack with 23% of farmers citing him as such.

This year that lead has stretched considerably, with 43% finding Mr Johnson “annoying”.

The apparent drop in farmer support for the Conservatives will come as welcome news for the main opposition parties, especially Labour, which declared at its conference in Brighton last September that winning more rural seats is “vital” if the party is to return to power.

Labour’s shadow Defra secretary, Jim McMahon, said the party did not comment on political polls, but was quick to criticise the government’s post-Brexit record on agriculture.

“The Conservatives are intent on rushing into trade deals that will undercut our own high-standard food production,” he said.

“On top of failing to prepare for and deal effectively with food sector labour shortages, they have overseen red tape and border delays, which have seen food rotting in fields and stuck in queues, and the distress of farmers having to send healthy pigs for wasteful culling.”

Mr McMahon claimed that rural England stands to lose more than £255m this year alone as a result of cuts to government support, risking as many as 9,500 agricultural jobs.

The main beneficiary of the decline in support for the Conservatives, however, are the Liberal Democrats, who have seen a near doubling in support.

“Meanwhile, they say they understand the important role farmers have to play in our future, but they’re cutting support payments when the replacement will not be ready for years.

“The Conservatives have taken farmers’ votes for granted for far too long and through their actions they risk losing it forever.”

But Defra secretary George Eustice defended the government’s actions, saying it was “revolutionising” the way farmers are supported.

“Since publishing the Agricultural Transition Plan, we have made significant progress on and improvements to direct payments, environmental and climate outcomes, farming prosperity, and regulation and enforcement,” Mr Eustice said.

“Among other things, we’ve invited 2,000 farmers to apply for the Sustainable Farming Incentive pilot, launched a consultation on our approach to the lump-sum exit scheme and delinked payments, and made simplifications to the 2021 Basic Payment Scheme offer.

“Labour and the Liberal Democrats would have kept us tied to the Common Agricultural Policy, which failed to deliver for farmers, farming and our environment.”