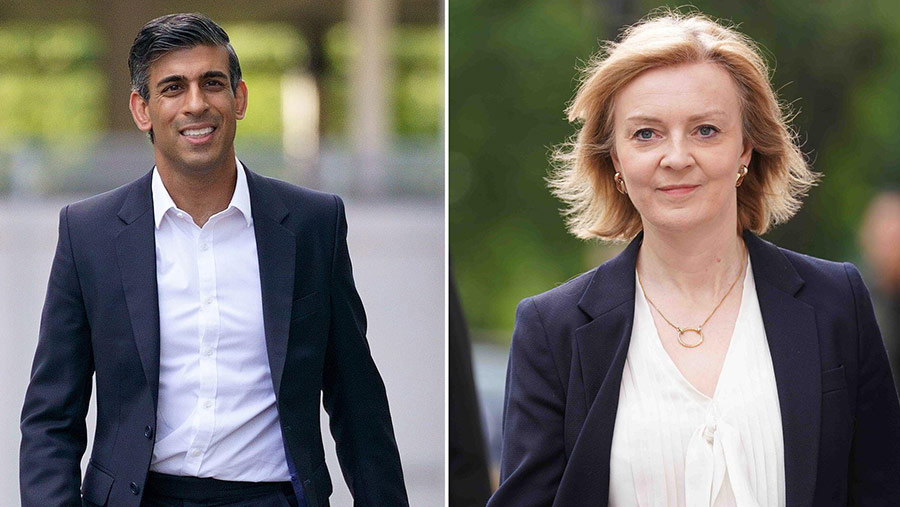 The NFU is urging Liz Truss and Rishi Sunak to attend a hustings where farmers can assess the pair’s pledges to back British farming, as the leadership hopefuls compete for the support of Conservative Party members in a bid to become the next prime minister.

Both Ms Truss and Mr Sunak have set out their commitments to British farming, and the NFU wants the opportunity for farmers to examine and question the plans in more detail.

See also: Truss and Sunak set out their plans for farming

Delivery of ballot papers to Conservative Party members to vote for the next prime minister has been delayed this week following security concerns about a hacking risk to online voting party members.

We’re asking both to attend a hustings where farmers can assess each candidate and their pledges to backing British farming#BackBritishFarming 🇬🇧👨‍🌾 pic.twitter.com/4HeSPddp2c

Farmers Weekly spoke to some farmers who will eventually have their say in the leadership vote, to find out who they are backing and why.

Cheshire dairy farmer Phil Latham says he will vote for Mr Sunak based on a process of elimination, because he can’t trust Ms Truss following the Australia trade deal, which was not scrutinised in parliament.

“The evidence doesn’t look good that she’s got our interests at heart. She looks like someone with imposter syndrome every time she stands up,” he said.

“Unfortunately there is not a lot of trust. We negotiated the ability to have scrutiny of the deals, which gave the NFU and farmers some comfort that we wouldn’t do deals that would export our productive capacity overseas, and at the very first opportunity that has all been forgotten.”

Mr Latham said both of the candidates will have to “earn their stripes in terms of trust and rebuild something on the basis of evidence, not on the basis of what they say”.

Mr Rayner said he would be voting for Ms Truss, believing she was honest and had a better understanding of agriculture. “I wish Liz the best of luck and the government now needs to get on with governing the country,” he said.

Mr Rayner believed Mr Sunak had “stabbed Boris Johnson in the back” and could not be trusted.

The leadership contest has triggered much debate among the wider farming community, and Farmers Weekly also spoke to farmers without a vote on the Tory leadership, to find out who they think would make a better prime minister.

Mr Henshaw praised his work as chancellor during the coronavirus pandemic, and how he plans to help the UK recover.

“He kept a lot of people with a roof over their head. He speaks as it is. There is no good trying to kid people, we have gone through the massive spend through Covid, you can’t keep borrowing money,” Mr Henshaw said.

Mr Sunak has visited the farm shop, where Mr Henshaw sells beef, lamb and pork produced on his farm.

“He is very much supportive, he expressed his interest. He is very much involved and wants to be involved, making sure everyone is happy,” Mr Henshaw added.

“She’s the only one of the two who has asked to come to my farm. I think the tide hopefully has turned,” he said.

“I think she understands [the pressure on farmers]. I said, as farmers, we aren’t afraid to work, but we’ve got to be paid a fair price for what we produce.”

A snap poll on Twitter, shared mainly among farmers, suggested a clear preference for Rishi Sunak as the next prime minister, though many commented that neither candidate was suitable for the job.