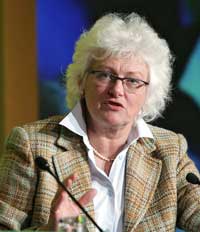 Winning public support for the Common Agricultural Policy is crucial if sufficient funding is to be channelled into farming and the rural economy post-2013.

Addressing a European parliament workshop on the future of the CAP, which will face its next reform in three years’ time, agriculture commissioner Mariann Fischer Boel said the days of market management were over.

“If the general public thinks for one moment that we have something like this in mind, support for the CAP will collapse and I can guarantee the sharks will gather to grab what they can of the CAP budget.”

Mrs Fischer Boel was adamant that winning and keeping support meant designing a CAP with clear goals that the public could sign up to, even if this meant a redistribution of funds among member states.

But there was still a need for a strong CAP, she said, designed to boost agricultural production, ensure good land management, improve rural services and address climate change. And Mrs Fischer Boel insisted that a recently-leaked report talking of substantial cuts in CAP spending post-2013 (News, 30 October) was already “in the bin”.

Country Land and Business Association policy director Allan Buckwell also addressed the meeting, stating that the EU Commission needed to focus on future priorities rather than cost. “To start cutting the budget and redistributing it and only then looking at transforming the CAP is the reverse of what we should be doing.”

Prof Buckwell said the impending reform would have to address the legitimacy of the single farm payment. Justifications ranged from income support, to compensation for higher standards, to environmental payments, to a payment for food security.

Any moves to cut SFPs would have to be handled carefully since they accounted for 36% of farm income on average throughout the EU. “But there are going to be cuts in these payments, so they need to be transformed into something that helps with agricultural adjustment.”

Overall, the MEPs at the workshop welcomed a retention of the CAP post-2013, but it needed to address a range of issues, including climate change, food security and water management.