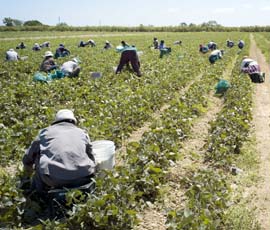 The government agency set up to regulate gangmasters who supply farm workers faces reform after concern it has overstepped its remit.

Farm minister Jim Paice told MPs he was looking at changing the way the Gangmasters’ Licensing Authority functions because of the issue.

“There has been some concern that the GLA has broadened its perspective way beyond the sectors it was originally intended rightly to do.”

Mr Paice added: “I won’t deny that we are looking at areas of its activities that could be altered.”

The government is also looking at the issue of civil penalties and fines.

The law requires gangmasters and employment agencies that supply workers to farmers to be properly licensed.

It is a criminal offence to employ labour from an unlicensed gangmaster.

But he stopped short of saying whether this responsibility would remain with the agency – or whether it would be brought into a government department.

There has been speculation that the agency could be abolished and its functions brought into DEFRA or the Department for Business.

Mr Paice made no mention of this.

An announcement would be made next month as part of the government’s response the Farming Regulation Task Force, he said.

Led by former NFU general director Richard Macdonald, the taskforce made more than 200 reccomendations for cutting red tape in agriculture.

They included the recommendation that the GLA inspection regime should be moved to a more targeted, risk-based approach.

Mr Irranca-Davies had called for a guarantee that the government’s drive to reduce red tape would not be used to water down the agency’s powers.

Instead, the government should work to strengthen the GLA.

The agency had been established with wide cross-party support in response to the 2004 Morecambe Bay tragedy, said Mr Irranca-Davies.

The tragedy saw 21 cockle pickers drowned by an incoming tide as they collected shellfish off the Lancashire coast while working for a gangmaster.

“No-one wants a return to the horrors of Morecambe Bay, or to see the continuing and sickening trafficking of people by criminal gangs.”

Mr Irranca-Davies said: “It’s an example of good regulation and enforcement, which resulted only last year in 12 high-profile operations and prosecutions.”

“While the exploitation of workers continues, the need for the GLA is as great as ever,” he told MPs.