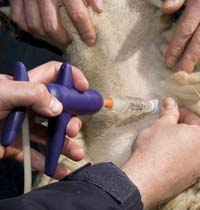 Farmers who import livestock should bear the cost of testing the animals for bluetongue, delegates at the NFU council at Woodland Grange, Leamington Spa, heard.

The NFU remained fundamentally opposed to government plans that will see English producers forced to share the cost of combating animal disease, said Kevin Pearce, the union’s head of food and farming.

While those plans were likely to become a reality, farmers must not be forced to pick up the tab for fighting non-agricultural disease outbreaks, he warned. This included the cost of equine diseases and the cost of testing imported livestock.

At the moment, the cost of testing imported animals was borne by DEFRA. But government plans to introduce cost and responsibility sharing could see that expense passed on to the farming sector.

Mr Pearce suggested it would be wrong for the wider livestock sector to fund the testing of imported animals on behalf of a minority of producers who persisted in bringing in livestock from areas of Europe at risk from bluetongue.

“These are high-value animals, they get sold on and they make a lot of money,” Mr Pearce told delegates to the council on Wednesday (28 January).

DEFRA is expected to launch its third consultation on cost and responsibility sharing in mid-February. It is widely expected to include options for establishing either a new non-ministerial department or a non-departmental public body for animal health.

It was likely the new body would have responsibility for all areas of animal health policy and delivery, said Mr Pearce. If everything went to plan, it was likely to be up and running by 2012 (see box).

Primary legislation would be required if the government chose to impose a levy on producers to raise money for fighting animal disease. But Mr Pearce said: “The bulk of funding must be public funding because animal health is a public good.”

It was vital to ensure any primary legislation included legal powers giving the industry a formal say in how any money was spent. But the prospect of a general election meant the timetable for legislation was tight.