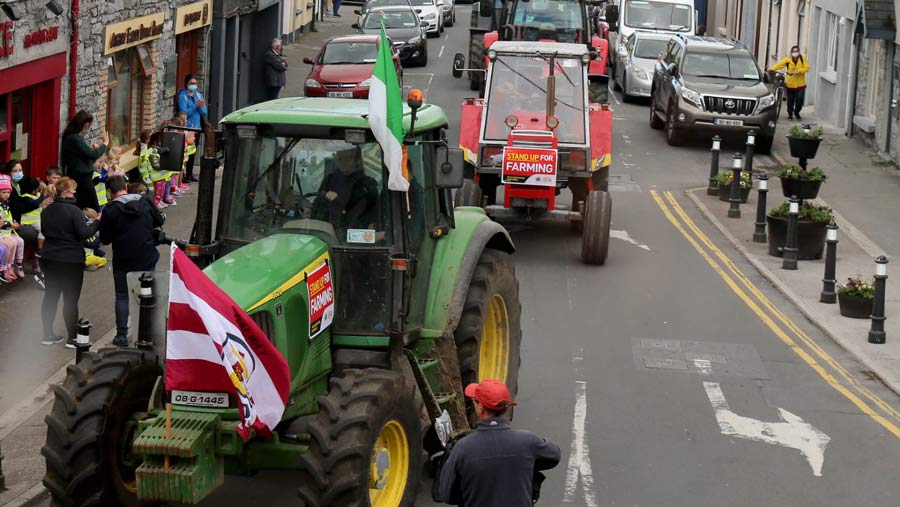 Irish farmers gathered in 30 towns around the country on Friday 11 June, warning against the dangers of planned CAP reforms and climate change legislation.

The nationwide rally, organised by the Irish Farmers’ Association (IFA) to highlight the importance of farming to the rural economy, was the first large-scale demonstration since the Covid pandemic struck last year.

“The county towns that we visited rely heavily on our sector,” said IFA president Tim Cullinan. “Any reduction in activity in agriculture will hit them hard.”

In particular, the IFA is concerned by the current direction of CAP reforms being negotiated between the EU Commission, EU Council and European Parliament.

So-called “trialogue discussions” have been under way since the start of the year, aiming to shift more money into environmental and climate change measures, tighten rules on keeping land in “good agricultural and environmental condition”, and channel more money to small and medium-sized farmers.

“Last week, I met the Taoiseach [prime minister] Michael Martin and warned that, unless there is a change in the current direction of the CAP, farming in Ireland, as we know it, will cease to exist,” said Mr Cullinan.

“The EU wants farmers to do more environmental actions, but they won’t fund it. To deflect from this, they have come up with proposals designed to divide farmers.”

The IFA also has the new Climate Action Bill in its sights.

“Irish farmers are committed to climate action, but policies and targets are being pursued at EU and national level without any assessment of the economic and social impact they will have on farmers and rural Ireland,” said Mr Cullinan.

Anomalies within the bill are likely to increase global warming rather than reduce it, he said.

“The bill’s overall goal is to be climate-neutral by 2050 on a ‘net carbon’ basis. However, the proposed definition of carbon budgets refers to emissions and not removals.

“As it is currently drafted, it will also result in ‘carbon leakage’.  Less food will be produced in Ireland, with more being produced in countries with a higher carbon footprint, which will increase global warming.

“It’s environmental showmanship with no regard for the real impact on actual global warming.”

Mr Cullinan said he was frustrated that the government was refusing to take amendments to its bill, while current farming environmental schemes were completely over-subscribed.