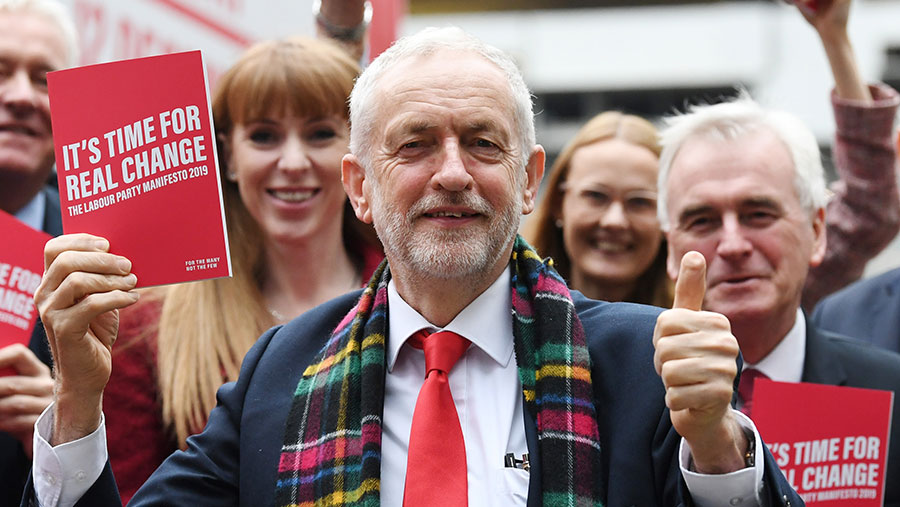 The Labour leader unveiled his party’s manifesto in Birmingham on Thursday (21 November), saying it was the “most radical and ambitious plan to transform our country in decades”.

It contains previous commitments to stop the badger cull and free broadband for all, delivered by part-nationalising BT.

But there are also some new pledges, such as the creation of 1m “green jobs” to tackle climate change, open more county council tenant farms and appoint an animal welfare commissioner.

Labour has pledged to increase funding for Defra executive agencies and arms-length delivery bodies by £70m by 2023-24, including £50m for Natural England “to ensure the highest-quality, accurate environmental impact assessments for our nature restoration and economic transformation programme”.

By this period, the party says it will also have increased funding to Natural England by £75m for managed recreational access and nature restoration in our current and future national parks.

Labour’s manifesto contains about 20 significant pledges that would affect the food and farming industry.

1. Land Invest in more county farms to replace those lost, and work with agricultural organisations to increase access into farming for new entrants.

2. Wages Re-establish an Agricultural Wages Board in England so every part of the UK is covered.

4. Badger cull End the Conservative’s “ineffective” badger cull, which the party describes as “the largest destruction of a protected species in living memory”.

6. Brexit Secure a new deal with the EU to leave the bloc and put it to a legally binding referendum, including the option to remain in the EU.

9. Flooding Provide an extra £5.6bn in funding to improve the standard of flood defences, and respond to the increased risk of flooding, prioritising areas at risk in north-west England, Yorkshire and the East Midlands “that have been neglected by Conservative investments”.

14. Food security Establish a National Food Commission and make food security a reason to intervene in the economy and work with local councils to minimise food waste.

15. Nature restoration Labour’s Plan for Nature will set legally binding targets to drive the restoration of species and habitats.

16. Tree-planting Embark on an ambitious programme of tree planting, with both forestry and native woodland species.

17. County farms Invest in more county farms to replace those lost, and work with agricultural organisations to increase access into farming for new entrants.

20. Migrant workers Establish a humane immigration system, built on human rights and aimed at meeting the skills and labour shortages that exist in our economy. Ensure justice for migrant domestic workers and restore the overseas domestic workers’ visa. If we remain in the EU, freedom of movement would continue. If we leave, seek to protect rights of free movement of EU citizens.