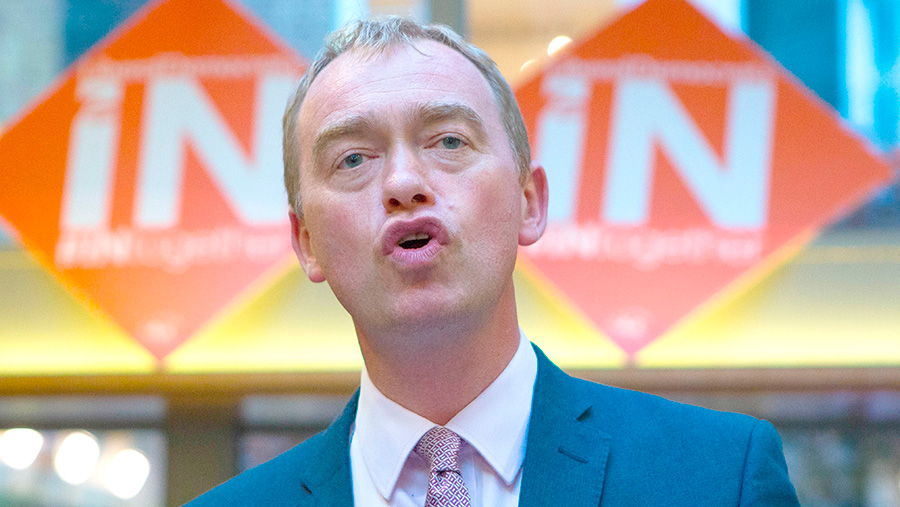 New Defra secretary Andrea Leadsom must keep her promises that farmers will be paid the same level of subsidies after Britain leaves the EU, the leader of the Liberal Democrats has insisted.

British farmers receive between £2.4bn and £3bn a year in subsidies from Brussels under the CAP.

See also: What can farmers expect from Andrea Leadsom?

Prominent Vote Leave campaigner Mrs Leadsom said during the EU referendum debate that “the UK government will give you the same money when we leave the EU”.

She also recently pledged to keep direct subsidies “in the short-term”. However, in a 2007 blog post about agriculture, Mrs Leadsom said “subsidies must be abolished”.

Mr Farron said farmers needed reassurance at a “very difficult time for many”.

Now is the time for Andrea Leadsom to honour the promises she made to our farmers during the referendum campaign Tim Farron, Liberal Democrats

Figures from AHDB Dairy released this week showed 72 Cumbrian dairy farmers have gone out of business in the past three years, including four in the past month alone.

“Now is the time for Andrea Leadsom to honour the promises she made to our farmers during the referendum campaign,” said Mr Farron.

“She must protect the support that our farmers rely on. She must back up her promises with action.

“The farming community is under a lot of pressure at the moment, and without this support even more farmers will be driven under.

“I will do all I can to fight to protect our farmers.”

Mr Farron said a Defra minister told him on Friday morning (15 July) that “decisions on the future of agricultural support will be taken once the new government is in place”.

The NFU did not address the question of subsidies in its reaction to Mrs Leadsom’s appointment.

NFU president Meurig Raymond said: “We need a guarantee from government that agreements for farmers in agri-environment schemes will be honoured in full; we need a continuing commitment to the 25-year TB eradication strategy.

“And above all, we hope that Mrs Leadsom will champion British food and farming.”

Jonnie Hall, NFU Scotland’s director of policy, said: “With agriculture taking nearly 40% of the European budget and tariff-free trade providing important markets for Scottish produce, it is vital that the new Defra secretary hits the ground running and recognises the significance of the sector as we commence our withdrawal from the EU.”

Country Land and Business Association president Ross Murray said: “Highest on the agenda will be immediate action to reduce uncertainty in the wake of the vote for Brexit.

“We will be asking Andrea Leadsom to make swift commitments on five priority issues for the rural economy – ensuring direct payments up to 2020; honouring agri-environment agreements; establishing a new food, farming and environmental policy to succeed and better the CAP; engaging in full and clear consultation with farmers; and honouring commitments under current EU structural fund programmes.”

A Defra spokesman said: “We now have an unparalleled opportunity to make sure all our policies are delivering for Britain and to grow our world leading food and farming industry.

“It is business as usual for farmers who will continue to receive support payments.

“Though the secretary of state is very clear this now needs to be looked at carefully and is looking forward to working with industry and the public to develop new proposals that support our agricultural industry as we leave the EU.”