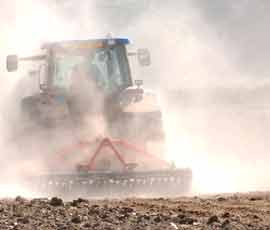 March is set to be one of the driest on record after England and Wales recorded just a fifth of its usual rainfall in the first three weeks of the month.

Across the whole of Great Britain, a third of the usual amount of rain was recorded in the first half of the month.

According to the Met Office, the figures mean this March could prove to be one of the driest since records began.

The last time so little rain fell was in 2003, when just 54mm was recorded in the UK over the whole month.

Helen Chivers, Met Office spokeswoman, said unsettled weather from the middle of next week meant the rainfall figures would go up.

“But it would have to be exceptionally wet to catch up with the average,” she said.

“It certainly looks like it could be one of the driest Marches on record if we don’t see an appreciable amount of rain next week.”

The figures come as the EU launched an assessment on water pricing for some agricultural areas after a European Commission report warned that water scarcity has become critical in some parts of Europe.

Published last Tuesday, the report says the UK is one of several countries including France, Portugal and Spain, which has reported lower than average rainfall and droughts.

Meanwhile the Czech Republic, Cyprus and Malta faced continuous water shortages in 2009 and 2010.

Warning that water shortages are not limited to vulnerable Mediterranean countries, the report says water shortages have been reported locally in many countries and welcomes the introduction of water tariffs in eight member states to address water use.

Responding to the report, the EU executive said it had launched an assessment of the impact of water pricing policies for the agricultural sector in certain river basins.

Including the Water Framework Directive within Common Agricultural Policy cross-compliance is another option being considered by ministers to ensure farmers used water supplies sustainably.

The Commission is expected to produce a blueprint for safeguarding the EU’s water supplies by the end of 2012, which will include ways to improve the efficiency of water uptake in agriculture.