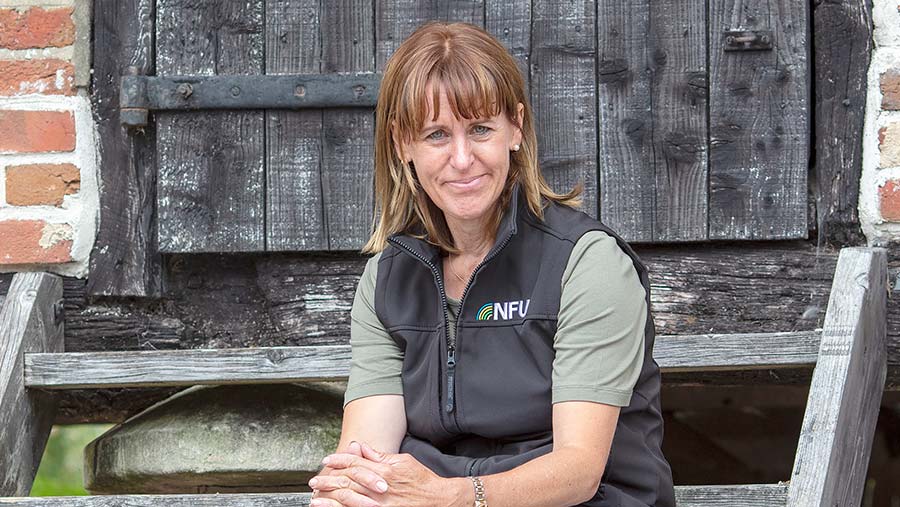 Minette Batters, the NFU’s first female president, has been in the job for almost two years. We talk to her about a tough past 12 months for farmers and what she thinks are the current priorities for the industry.

Over the past year growers and livestock producers faced a raft of challenges – from extreme weather to volatile commodity prices.

Accompanying this, is a seemingly constant flow of accusations that farmers are contributing to climate change and that people should switch to plant-based diets to save the planet.

In particular, news reports and TV programmes blaming beef producers for greenhouse gas emissions have driven enormous feelings of worthlessness, anger and despair among farming families – and the NFU is determined to right that wrong, says Ms Batters.

Singling out the BBC as the main culprit, she says the broadcaster repeatedly targeted beef producers during 2019 – suggesting that viewers and listeners should eat less meat and adopt more plant-based diets instead.

The recent hour-long programme Meat: A Threat to Our Planet? failed to provide a balance of what sustainable beef production should look like, Ms Batters adds. “That is where our gripe with them lies – that it isn’t balanced, and it isn’t showing where the solutions are.”

The BBC rejects this assertion. Presenter Liz Bonnin says her programme clearly pointed out that some farmers rear animals in ways that allow the land to regenerate – and support soil health and biodiversity more than other types of farming.

But Ms Batters adds: “This has been ongoing for a long period of time. We are taking legal advice on how to take things forward. We are leaving no stone unturned anywhere in order to right the wrong – and to get the BBC to adopt a balanced approach.”

The UK can be a global leader in climate change and sustainable food production, she adds – in the same way that the government and the livestock industry have led the world on reducing the amount of antibiotics used in food production.

“The world is crying out for that global leader. But it is so much easier in life to campaign against what you don’t want rather than for what you do.”

Next month marks a year since Ms Batters unveiled the NFU’s goal for UK agriculture to be carbon-neutral by 2040 – a full 10 years before the government’s own 2050 net zero target. By farming smarter, she believes it can be achieved without reducing livestock numbers.

Climate change is the challenge of our time, she says. “We know we can be part of the solution. And we know with the right policies there doesn’t need to be any impact on farm incomes and there doesn’t have to be any downsizing in production.”

Avoiding the well-worn mantra that farmers can’t be green if they are in the red, Ms Batters says profitability is vital for the target to be met. “We don’t have economic sustainability in farming at the moment. We are in many cases selling at the same price we were 20 or 30 years ago.

“Milk is in a very precarious place. We have seen the situation for beef and sheep over the past 12 months. And it remains a very difficult market for growers too. Pigs are now 25p/kg below the European price and this is not sustainable at all for UK producers.”

This makes it crucial that any post-Brexit trade deal is fair for farmers, she adds. “With a government that is absolutely focused on stepping back from direct support, it is important that farmers achieve a fair return from the supply chain.”

Legislation will be needed to ensure transparency. “It is clear that voluntary codes are not fit for purpose,” she says. “They have to be mandatory and it is very clear to me that the remit of the Groceries Code Adjudicator needs to be massively scaled up and has to be given some teeth.”

At the same time, Ms Batters says the NFU remains determined that the government must honour its commitments and ensure British farmers are not undermined by cheap food imports produced using methods that would be illegal in the UK.

“Boris Johnson is very clear that he doesn’t want to see our own standards compromised. But we are not clear on what trade policy will look like – or what future food import standards will look like. It needs to be addressed.”

Substandard food imports would disadvantage British farmers – and put UK producers out of business. “I don’t believe that is the Brexit that anybody wanted – regardless of how they voted. For us, it is about making sure agriculture is not sacrificed in future trade agreements.”

Mindful of government plans to base post-Brexit farm support on environmental payments, Ms Batters argues that market volatility means there will still be a need for some form of direct payment in addition to support that helps farmers raise productivity.

“The big difficult nut to crack is volatility and risk management. What we have said is that we should be absolutely looking to maintain a minimum of 30% of direct support until we have another mechanism that manages risk.”

More than 60% of farm businesses would be unprofitable without direct support, she adds. It would be a “dereliction of duty” for the government to expect farmers to deliver for the environment or reinvest in their businesses without measures to mitigate volatility.

Alongside this, food must remain affordable for consumers while ensuring farmers can make a living. “There is an austerity crisis. A lot of people have £50 a week to feed a family of four. We must make sure that food production is relevant to all those budgets.”

Praising shoppers who continue to buy British and noting how much demand there is for high-quality red meat, Ms Batters says: “Our reputation as farmers has grown and grown – and we have big consumer loyalty. But that is not something we should take for granted.

“We can never stop – we have to be continually focused on making sure we are relevant with every consumer at every price point – making sure they want to buy British. Not because they live under the Union Jack, but because it is the best.”

Minette in a Minute

On the NFU’s 2040 net zero target
It was absolutely the right thing to do. It has opened doors – people know what we can do whereas previously agriculture was outside the discussion.

We need to think differently about how we produce food and we know those technologies are there to help us do it. It is an exciting time. And when I speak to farmers on the ground, they are really up for it.

On the end of direct support
We have been effectively the recipients of a blank cheque under the Common Agricultural Policy.

The Treasury has spoken out four or five times in the past 11 years and said it would end it the moment it had the opportunity. So we know things will change and it will be different.

On how farmers will adjust
There is a real need for the future government to be open and honest with people about the journey they are on.

Without doubt this is going to be the biggest reform in agriculture since the 1940s. That means a big role for all farming organisations to prepare people for the change that is coming.

On Boris Johnson
He has talked the talk, now he needs to walk the walk. He was at the Welsh Winter Fair promising sheep farmers that life would be better post-Brexit, that there will be more money, better trade deals.

I desperately want to believe him. But I have huge concerns.

On the government’s food strategy
We have said for a long time we need a national food strategy and now we have an opportunity to bring it to life. I don’t want to be reacting to government policy and saying, ‘if we had done it we would have done this’.

It is an important piece of work. But it will still be shaped – and to a certain extent live or die – on the outcomes of trade policy that the new government delivers.

On the planned Day of Action for agriculture
It will be a real show of unity and strength across England, Scotland, Wales and Northern Ireland – putting a marker down in the early part of 2020.

It isn’t something we have done before but it needs to happen and I believe that time is now.