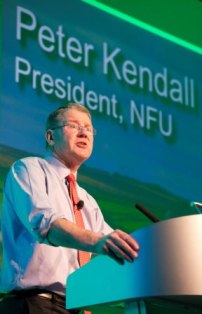 The government must introduce a food white paper to set out clear plans for creating sustainable food supplies in the UK, NFU president Peter Kendall has claimed.

Speaking at the NFU conference in Birmingham on Tuesday (15 February), Mr Kendall called for the government to create a “substantial business plan” to reduce the UK’s growing dependence on imports.

Addressing DEFRA secretary Caroline Spelman, Mr Kendall said rocketing food prices thanks to droughts, floods and rising temperatures across the world meant rich countries could not sit back and expect the rest of the world to feed its people.

He said the government’s Foresight report, which set out the challenges for global food production, was a “wake-up call” and pointed to the need to take urgent and co-ordinated action if secure food supplies were to be maintained.

Mr Kendall said increasing domestic food production would not be achieved without the government making food production one of its priorities in its new national planning framework, as well as taking urgent and concrete action on the Groceries Code Adjudicator.

He also called on Mrs Spelman to reconsider the government’s ambitions for CAP reform and the removal of direct payments.

“We do want to get to a place where we’re less reliant on public support,” he said. “But we’re not there yet.

“Ending subsidies won’t miraculously make the market work. Unless and until that is sorted out – and unless we drive competitiveness and manage volatility, producers at the sharp end of the food chain will have no chance of going it alone.”

Mr Kendall said the industry recognised there would be strains on national budgets across Europe and it would be foolish not to recognise CAP budgets would not be affected.

But he said the Foresight report showed it was time for a “strong and common agricultural policy”.

“Foresight puts farming at the centre of the challenges of the future,” he added. “It is right that agriculture is at the top of the political agenda, but we need [DEFRA’s help] to put it there.”