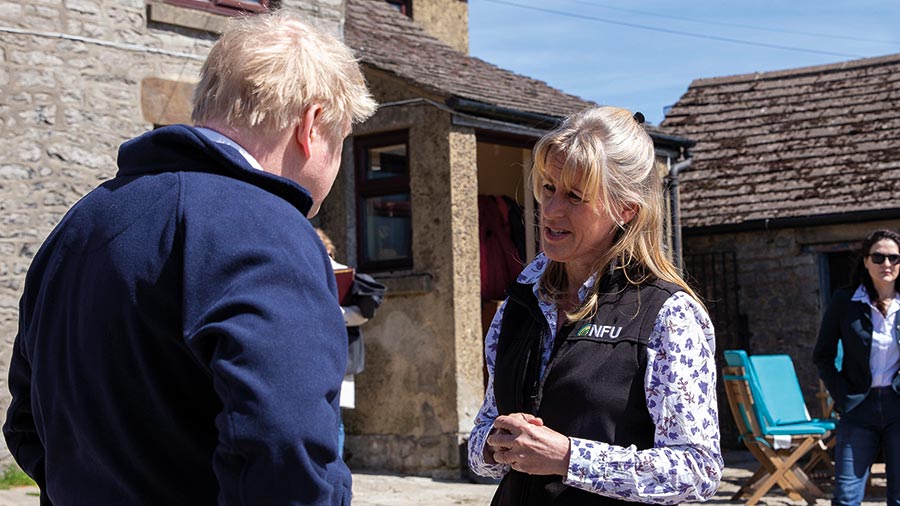 NFU president Minette Batters is urging the union’s 55,000 members to ramp up the pressure on their MPs in fighting for the future of farming.

Speaking at this week’s NFU Council meeting in Warwickshire, Mrs Batters said the organisation was facing the greatest challenge since its formation in 1908, to try to convince political leaders to “go down the right path”.

“Otherwise, never will so much be lost, for so little,” said Mrs Batters, echoing Winston Churchill’s wartime speech.

“So, whether it’s mass lobbies, whether it’s bringing all the processors, all the manufacturers together, we will do whatever it takes,” she said.

Prime minister Boris Johnson and his government were standing at a crossroads with the future of UK agriculture, Mrs Batters told members.

“The government has two roads it can go down and it is, believe me, sitting at that T-junction right now,” she said.

“It can go down the partnership route, lead what I believe is a global transformation of climate-smart farming. Or it can face hard into a war of attrition with farmers.”

Last week, the NFU urged ministers to postpone their plans to slash direct payments for farmers in England in 2022 and 2023, warning that the industry was on a “knife edge”.

Mrs Batters said the NFU had a “moral responsibility” to listen to the evidence on the government’s plans for farming.

The National Audit Office has warned that core parts of the future Environmental Land Management (ELM) scheme are not in place. “The detail isn’t there,” Mrs Batters said.

Analysis by land agents has also warned that some farmers could be looking at a 50% drop in profits under the move away from the Basic Payment Scheme to ELM, due to the costs of carrying out environmental work.

England was “effectively up for sale” and there was a real danger that “public money for public goods is up for sale to private equity”, Mrs Batters said.

She also revealed that she and NFU colleagues had sat through numerous meetings where they had been told that “government has no interest in food growing on our land”.

But if the industry gets the platform right for ELM, she believes there is “enormous opportunity to progress through nature recovery to landscape recovery” and to lead a “transformative approach to public money for public goods, by bringing the private and the public sector together”.

In response to more than a million people signing the NFU’s food standards petition, for example, the government created the Trade and Agriculture Commission to scrutinise trade deals.

“These are shark-infested waters. They really, really are,” Mrs Batters said. “And the only future ahead is to make sure that this is farmer-led.”

Her comments come as the farming industry is beset with huge challenges, including labour and haulier staff shortages, a growing crisis in the pig sector, and huge cost increases in inputs, especially fertiliser and chemicals.

Dr Rickard told Farmers Weekly: “There are enormous opportunities for the farming industry, if only someone believed in promoting food production, rather than the environment and growing trees. But there seems to be no appetite for it.

“That’s not to say that climate change and the environment aren’t important. The point is you can have both. But we seem to be saying you cannot, and that is the sad thing.

“We need the industry to be given the science and technology to compete, be sustainable and reduce its carbon footprint.

“Boris [Johnson] promises everyone all sorts of things. But he has got no intention of stopping food imports from Australia, New Zealand and the like. We are facing an industry [UK farming] that is going to shrink and become more of a provider of public goods than food.”