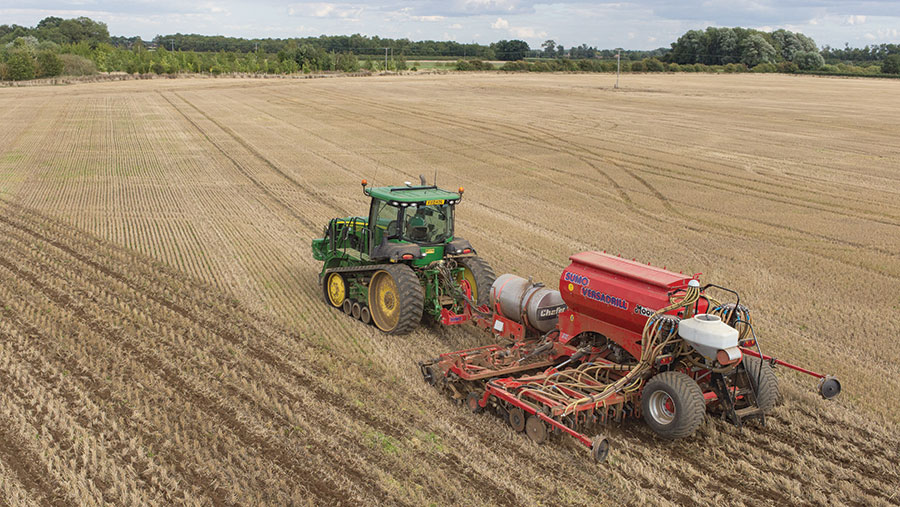 The NFU is urging the government to postpone its plans to slash basic payment rates for farmers and land managers in England in 2022 and 2023 amid a turbulent period for UK agriculture.

Direct payments in England will be phased out over a seven-year agricultural transition period (2021-27), starting this December where most farmers will receive a 5-25% cut to their annual Basic Payment Scheme (BPS) cheque.

The NFU is not calling for the planned reduction in BPS payments for 2021 to be reversed.

However, it is seeking the postponement to BPS reductions in 2022 and 2023, alongside a review of Defra’s future farming programme for England.

NFU president Minette Batters said farmers and growers were currently facing huge challenges, even before the phasing out of direct payments and replacing those with the Environmental Land Management (ELM) schemes, which Defra doesn’t expect to be fully operational until 2024.

“I really fear for the future success of farming in this country if the government presses ahead with its current timetable to transition to its new agriculture policy schemes which simply aren’t ready,” said Mrs Batters.

“That’s why we are calling for a postponement to the BPS reductions in 2022 and 2023, alongside a thorough review, to ensure the new policies and schemes are ready with clear incentives and objectives.”

Farmers and growers continue to deal with multiple challenges that are causing severe disruption to essential food-producing businesses, the union said.

The “perfect storm” has triggered a worker shortage – both on farms and in the production and distribution of food. This has caused serious harm to the UK’s just-in-time supply chains, and has resulted in shortages in some product lines, leading to empty supermarket shelves.

Meanwhile, rising inflation, which is adding increased costs to farms, against a backdrop of disrupted trade flows and a fierce retail price war, is causing huge challenges to people trying to run effective farm businesses.

Agricultural policy is a devolved matter and, on 21 September, the Welsh government announced that it would extend the BPS until 2023. Scotland and Northern Ireland have similarly delayed changes to their regimes.

In England, as things stand, basic payments will be halved by 2024 and abolished by the end of 2027, when the new ELM schemes – which will pay farmers “public money for delivering public goods” – will be fully phased in.

Mrs Batters said a review of Defra’s future farming programme for England would give ministers more time to develop the replacement schemes and for the sector to move forward from the multiple issues it’s currently facing.

“To be clear, we are not asking for the planned cut in direct payments in 2021 to be postponed,” she stressed.

“Defra will need to make some cuts to free up funding for the development and trialing of the new schemes while using the time to secure buy-in from all farmers.

“If these schemes are to be fit for purpose, we will need to see thousands of farmers signing up, instead of the 100s we have today.”

Mrs Batters said she really feared for the future success of farming in this country if Defra pressed ahead with its current timetable to transition to the new agriculture policy schemes, which “simply aren’t ready”.

The NFU has also expressed concerns after the National Audit Office reported that Defra had not yet published detailed objectives or ensured adequate incentive for farmers’ participation in the ELM scheme, resulting in a lack of uptake and the critical mass needed to achieve success for the government’s own environmental ambitions.

“Farming is a long-term business and we only have one chance to get this agriculture transition right,” Mrs Batters warned.

“I believe implementing a short delay now to BPS reductions will allow government the time it needs to deliver durable schemes and policies. We stand ready to work with government on the development and delivery of these new schemes.”

But Defra secretary George Eustice does not appear in the mood to row back on plans to phase out BPS quickly, pointing out that almost half the money currently goes to just 10% of recipients.

“It [BPS] achieved nothing more than inflated land rents and input costs, while preventing farmers from retiring and new entrants getting access to land,” he said.

“Since January, in England, we have increased the money going to Countryside Stewardship, we have consulted on an exit scheme and we will be setting out plans to support new entrants,” Mr Eustice added.

“At the same time, we have seen beef, lamb and milk prices rise to five-year highs.”