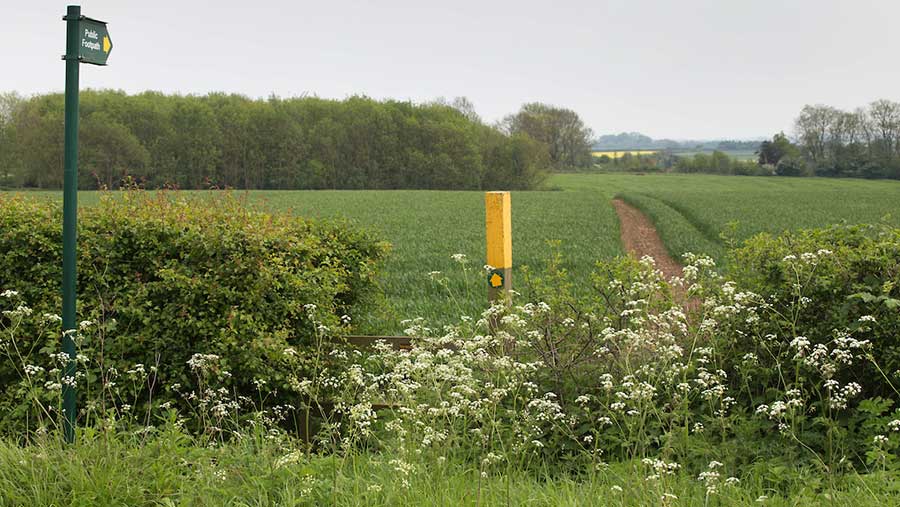 Farmers should be asked to maintain public footpaths on their land in exchange for government payments post Brexit, say ramblers.

The walking charity Ramblers, formerly known as the Ramblers’ Association, says landowners should be rewarded for adding new routes or improving existing paths on their land.

The charity is calling on the government to make access to the countryside and the path network a key part of its “public money for public goods” system under the new domestic agricultural policy post Brexit.

Agriculture accounts for 71% of land use in the UK, including a large proportion of the nation’s paths.

Landowners have a legal duty to keep paths on their land clear. But a YouGov poll of 1,848 people found more than two-thirds (69%) had experienced problems with footpaths in the countryside, including overgrown paths and blocked gates.

The vast majority (85%) of adults surveyed in England and Wales said they believe that being able to experience the countryside is important for children’s understanding of the environment and food production. The results also showed that more than eight out of 10 adults said visiting the countryside is good for their physical fitness (83%) and mental wellbeing (82%).

But almost two-thirds (65%) agreed that that farmers should receive less funding if they fail to maintain public footpaths on their land.

Tompion Platt, Ramblers’ director of advocacy and engagement, said: “Farmers and other landowners should be expected to meet their existing duties to keep paths on their land clear.

“We should also remember that countryside visitors can be a boon to rural communities. The path network helps people learn more about the important work undertaken by farmers, benefits tourism and local businesses.”

But CLA president Tim Breitmeyer said his organisation’s Land Management Contract proposes ways farmers and landowners could be rewarded post Brexit should they choose to help enhance existing public rights of way, including for visitors with limited mobility, and to provide new access on a voluntary basis.

“Users of public rights of way also have an important role to play. This includes leaving gates as they are found, keeping to paths, controlling dogs and respecting the countryside as a place of work as well as recreation.”

A Defra spokeswoman said: “Leaving the European Union gives us the opportunity to shape the future of our farming industry and protect the countryside that we all enjoy.

“Our recent consultation specifically identified access to the countryside as something that could be recognised and rewarded as a public good. We have also been clear that farmers and land managers have a vital role to play in educating the public and building deeper links to the countryside. We will bring forward our plans for legislation shortly.”