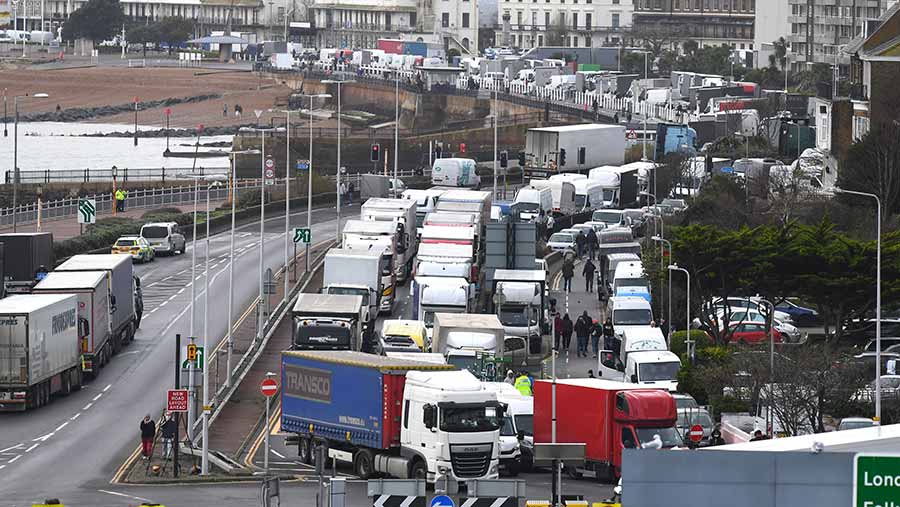 Shipments of perishable food must be given priority as France eases border restrictions with the UK, industry leaders say.

An agreement to allow hauliers with a negative Covid test to travel between the UK and France was announced late on Tuesday (22 December).

It came 48 hours after France closed its border with the UK following confirmation of a new virulent strain of coronavirus across south-east England.

The disruption affected shipments of seafood, red meat and other fresh produce – with thousands of lorries stuck in queues waiting to cross the English Channel.

Some abattoirs halted slaughterings as containers of chilled lamb due for export were forced to return home.

Affected companies have lost many thousands of pounds, with some firms caught up in the turmoil warning that they face going out of business.

Ian Wright, chief executive of the Food & Drink Federation, said the immediate challenge was to clear the backlog of lorries.

“Priority must be given to perishable loads like seafood and other fresh, short shelf-life foods,” he said.

“We now look to the army and local authorities to instigate a quick and efficient testing system in Kent that can allow trucks onto ferries and the Channel Tunnel.

Mr Wright said it could take more than a week to clear the backlog.

“Even working extremely quickly and with Calais possibly shut for Christmas Day it is clear that it could take until the New Year to return to normal operations.

“Lorries will take time to return to their normal pattern of collection and delivery.

“That means we are likely to see, locally, reduced on-shelf availability of some fresh vegetables and fruits, beginning next week.”

Mr Wright added: “Many businesses have lost very valuable – but uninsurable – consignments in these delays through no fault of their own.”

Government ministers had a moral duty to offer compensation to those who had lost product – nothing less, he said.

Transport secretary Grant Shapps said everyone travelling from the UK to France would have to show proof of a negative coronavirus test within the previous 72 hours.

“This protocol will see the French border reopen to those travelling for urgent reasons, provided they have a certified negative Covid test,” he said.

“We continue to urge hauliers not to travel to Kent until further notice as we work to alleviate congestion at ports.”

The protocol agreed with the French government will be reviewed on 31 December, but Mr Shapps said it could run until 6 January.

All lorry drivers, irrespective of nationality, will require a lateral flow test, with the results known within 30 minutes of testing.