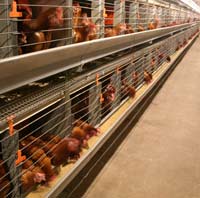 Smaller poultry producers are to remain exempt from the controls imposed by the IPPC Directive, which covers industrial emissions, following a key vote in the European parliament on Wednesday (7 July).

Changes to the rules had been proposed by the EU Commission in December 2007 which would have seen the threshold for inclusion in the regulations cut from 40,000 birds to a new level of 30,000 for laying hens, 24,000 for ducks and 11,500 for turkeys. This would have affected a large number of smaller, family farms.

But, after more than two years of discussions surrounding these and other amendments, MEPs in Strasbourg have voted to throw them out.

NFU chief environmental adviser Dr Dianne Mitchell said she was happy with the outcome. “I am both relieved and delighted,” she said. “The NFU remains convinced that the IPPC Directive is ill-suited to agriculture, having been originally formulated to govern large power stations.”

“It has taken three years of negotiations to reach this stage and throughout that time we have challenged the need for such controls to apply to more farmers,”

In a further concession, farmers who do fall under the Directive, but pose the lowest risk, will only need to be inspected every three years, so reducing the cost of maintaining permits.

But Dr Mitchell said there could still be issues regarding manure spreading or farms operating boilers with inputs of less than 50MW, with a review expected by the end of 2012. The existing thresholds for poultry units will also be reviewed by the end of 2011.

The legislation will now be written into law after a second reading by the council of ministers following after the summer recess.