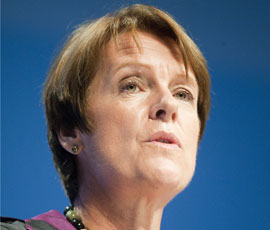 DEFRA secretary Caroline Spelman has promised an approach of engagement and persuasion to deliver a deal on CAP reform that is favourable to the UK.

Cautioning against any expectations of a quick settlement, she added: “There’s a long way to go in the negotiations. We need to persevere.”

In the meantime, the government was building alliances with other EU countries that oppose capping direct payments to farmers.

Those countries included member states such as Romania, Slovakia and the Czech Republic as well as traditional alliances like those with Scandinavia and the Netherlands.

Junior DEFRA minister Richard Benyon had shown the importance of engagement and persuasion in the deal he got on fisheries in December, Mrs Spelman said.

She and farm minister Jim Paice would be taking the same positive approach on the CAP.

“This round of CAP reform is crucial if we are to meet the challenges of food security and climate change,” Mrs Spelman told delegates.

The government wanted to do all it could to help farmers harness innovation and entrepreneurship within the farming industry.

Its work on CAP reform was part of this “Pillar 2 already includes measures to support innovation and the Commission’s proposal includes new measures, such as a European Innovation Partnership,” said Mrs Spelman.

“A more flexible design of the rural development regulation, coupled with stronger links across other EU funds, could also stimulate innovation.”