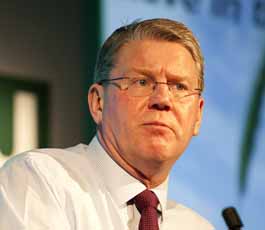 Arguing against a reduction in farm subsidies will send a poor message to the public at a time of austerity, NFU president Peter Kendall has warned.

The union was deliberately steering clear of campaigning against cuts to the Common Agricultural Policy budget, Mr Kendall told the Norfolk Farming Conference on Thursday (23 February).

It was more important to ensure that CAP reform treated UK farmers the same as farmers in other European Union member states, he told delegates at the John Innes Centre, Norwich.

Mr Kendall said: “If we end up with budget cuts of 20-30%, I am prepared to take it on the chin – so long as everyone else gets it as well.”

But the Euro-crisis has piled the pressure on Brussels for more substantial budget cuts.

Mr Kendall said it would be a “pretty poor message” for farmers to argue against cuts when schools, hospitals and the armed forces were all facing big budget reductions.

“Whenever the budget is decided across Europe, let’s make sure we are treated fairly in England and Wales and across the UK as a whole,” he said.

Mr Kendall was applauded for what was his first speech since being re-elected as NFU president for a fourth successive term in office on Wednesday (22 February).

Farmers needed to realise that CAP reform was not about protecting the status quo, he said. But a massive challenge lay ahead to secure a fair deal for UK farmers.

The reformed CAP needed to be as simple as possible, market-orientated and common across all member states. At the same time it mustn’t hinder progress.

“I’m not going to make a fuss about the budget – I want simple rules,” said Mr Kendall. “If we are going to unravel the system, let’s do it fairly and equally.”