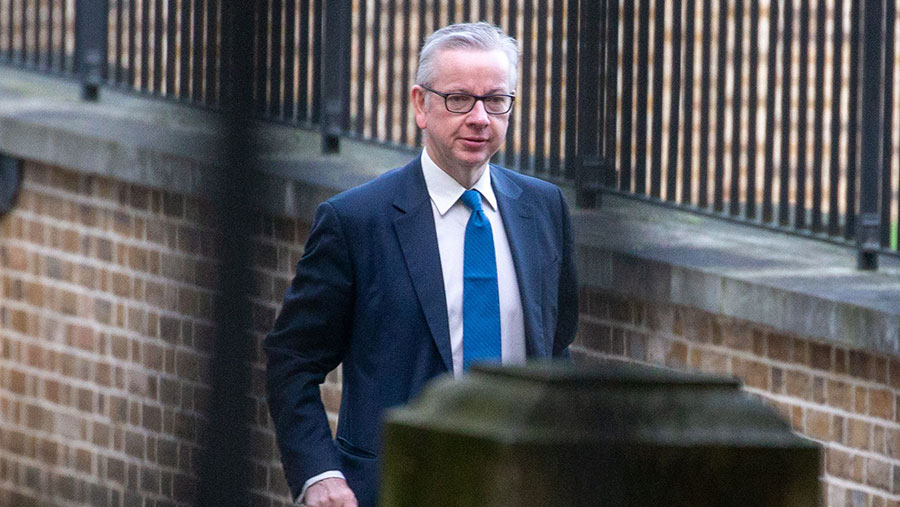 The Conservatives have promised to match the current annual budget for agriculture through the next parliament, if they win the general election.

Michael Gove, chancellor of the Duchy of Lancaster, made the pledge as he visited a farm in Castle Douglas on Wednesday (20 November).

“I’m delighted that we can announce that a majority Conservative government will safeguard farm payments for the lifetime of the next Westminster parliament,” said Mr Gove.

“That is a five-year guarantee and it means farmers and land managers will receive the same level of support in cash terms.”

Welsh Conservative spokesman for rural affairs, Andrew RT Davies AM, said: “This funding commitment will provide the agricultural industry in Wales with confidence and stability, while also demonstrating how important farming is in the Conservative vision for our country moving forward post Brexit.”

Under a Conservative government, the UK would leave the European Union at the end of January. From then onwards, farm payments would be funded by the Treasury rather than the EU’s Common Agricultural Policy (CAP).

Farmers had been concerned that the Treasury would shift funding from agriculture to other priorities, such as the NHS, education and national security.

Although the Conservatives have promised to maintain the overall budget, the party has not clearly defined the mechanisms how it will be divided.

Under the plans, land-based payments to farmers would be phased out over a seven-year period from 2021 to 2027. This would be replaced by a “public money for public goods” system, at the core of which would be the new Environmental Land Management (ELM) agri-environment scheme (See below).

The Country Land and Business Association (CLA) welcomed the announcement, saying it would provide much-needed certainty for farmers across the country.

CLA president Mark Bridgeman said: “[It] should be seen as a first step towards the long-term security we have been calling for since the EU referendum.

“Farmers work incredibly hard to provide high-quality food for the nation and beyond, as well as leading the fight against climate change and the loss of biodiversity.

“It is now vital that the political parties go a step further, guaranteeing British farmers will be supported during future trade negotiations, so they are not undercut by cheap imports produced to lower standards.”

Mr Gove claimed: “No other party is making this promise and no other country is offering such certainty for its farmers.”

But launching their own election manifesto on Wednesday, the Lib Dems pledged £3.6bn of annual funding for UK agriculture – £400,000/year more than the current funding levels under the CAP (£3.2bn/year).

1. Guarantee to match the current annual budget available to farmers in every year of the next parliament

This will ensure that farmers, growers and land managers have the time and security to adapt and prepare for life after the CAP.

In return for funding, they must farm in a way that protects and enhances our natural environment, as well as safeguarding high standards of animal welfare.

We know that farmers need stability, certainty and a smooth transition, so we will not switch to the new system overnight. We will establish a seven-year transition period so changes can be introduced gradually.

We will pay farmers for environmental stewardship, including air and water quality, measures to tackle climate change and its effects, soil health, animal welfare, public access to the countryside and action to reduce flood risks. The ELM scheme will be piloted and delivered during the transition period.

4. Encourage everyone to “buy British”

Recognising the high quality of British produce and, in an effort to reduce the carbon footprint of the food we consume, we will also use the opportunity of leaving the EU to encourage the public sector to “buy British”.