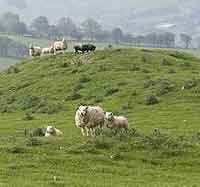 Farming unions in Wales have expressed concerns about the impact of the Welsh Assembly‘s new all-embracing agri-environment scheme.

Brynmor Morgan, outgoing chairman the county FUW branch, told the assembly’s rural affairs minister Elin Jones that this could affect the way farmers, “the true custodians of the countryside”, protected the environment.

He said: “Whatever prescriptions come from the assembly they should not affect incomes in such a way that a clearance of the hills is triggered, which could lead to the Welsh uplands becoming a desert.”

Members waiting to join previous schemes like Tir Gofal were particularly concerned that the door had been slammed in their faces.

Richard Tudor, Ceredigion NFU Cymru chairman, told the minister he was worried that the assembly had “missed the boat again” by including nothing about food production in the announcement about the new scheme.

Ms Jones promised to take farmers’ comments into consideration as details of the Glastir scheme were drafted. It would not work if it was not practical and light on bureaucracy.

She wanted the application process to be easy and simple to complete.

“If farmers do not buy into the scheme it will not work,” Ms Jones conceded.