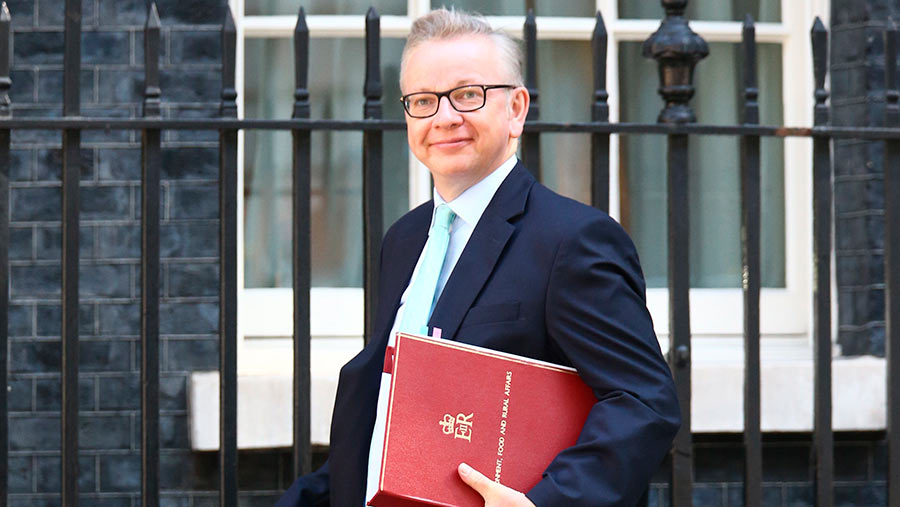 Michael Gove’s appointment as Defra secretary this week surprised everyone, including him.

A strong advocate of leaving the EU, Mr Gove will head the team tasked with forming Brexit policy for food, farming and the environment.

His biggest job will be shaping the UK’s new model for agricultural policy outside the world of subsidies under the EU Common Agricultural Policy.

Defra says “oversight of EU exit work and the overall policy programme” will top the list of Mr Gove’s responsibilities.

But what should farmers expect from Mr Gove? What does he stand for in terms of food and farming policy?

Farmers Weekly has delved into the past to unearth Mr Gove’s views on agriculture and rural issues, including his voting record on some farming issues.

In June 2013, Mr Gove voted in favour of culling badgers to tackle bovine TB. He also supports lifting the ban on fox hunting.

Mr Gove would like to see trade barriers with the rest of the world removed after Brexit. In an interview with Nick Robinson on Radio 4’s Today programme, he said: “We would benefit from being able to take back control of our seat at the World Trade Organisation.

“At the moment Britain is represented at the WTO by the EU’s single representative – an ex-sociology lecturer from Sweden.

Farm subsidies will continue until 2022 in line with the Conservatives election manifesto, Mr Gove has confirmed. After that, the future is unclear.

Mr Gove is committed to ensuring agriculture has continued access to migrant labour – and to do so, a new seasonal agricultural workers scheme may need to be introduced.

“We need to make sure that the workforce is there and the support is there,” he told Radio 4.

Mr Gove is committed to cutting unnecessary EU bureaucracy. He is involved in a cross-party major review, which aims to identify EU-originated red tape needlessly tying up British businesses.

In an interview with the Daily Mail before the EU referendum, Mr Gove said British consumers could benefit from cheap food as a result of striking trade deals with emerging nations after Brexit.

“An independent Britain could choose to strike free trade agreements with emerging economies and lower tariffs, extending new opportunities to developing nations and in the process allowing prices in Britain to become cheaper,” he said.

Mr Gove has previously stated that all EU farmers should be made to conform to the same standards on animal welfare as British farmers.

In particular, he said the rules were holding back development of homes in environmentally sensitive areas.

“As a result, my constituents and, perhaps your children, find homes more expensive and mobility in this country impeded,” he said.

In 2015, Mr Gove voted with the government when it applied a climate change levy tax on non-domestic electricity produced from renewable sources.

Mr Gove has generally voted in favour of handing more powers to devolved administrations, which could clash with suggestions that Defra plans to centralise more agricultural powers to Westminster after Brexit.

Mr Gove has a mixed record on fracking. He previously voted for greater restrictions on fracking in national parks. However, he has also voted against explicitly requiring environmental permits for fracking activities.

Mr Gove has consistently voted in favour of the government’s high-speed rail project, HS2, which will result in hundreds of farmers and landowners losing their businesses to compulsory purchase orders.

Who is Michael Gove?

Michael Gove is a 49-year-old Scot, who is married to Sarah Vine, a Daily Mail columnist. They married in 2001 and have two children.

Born in Edinburgh, Mr Gove was raised in Aberdeen and attended Lady Margaret Hall, Oxford, where he took a BA in English, graduating with a 2:1. He then began his career as a journalist.

He has been the Conservative MP for Surrey Heath since 2005.

Last year, Mr Gove played a major role in the UK’s referendum on EU membership as the co-convenor of Vote Leave and, along with Boris Johnson, he became a figurehead of the campaign.

In the 2016 Conservative leadership election, Mr Gove came third behind Theresa May and Andrea Leadsom. He was eliminated in the first round of voting

Mr Gove is also an author and a columnist for The Times.