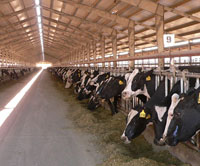 The Women’s Institute is on a collision course with farmers over proposals to oppose factory farming.

A resolution, due to be debated at the WI’s annual meeting in Liverpool in June, proposes that the group “abhors the practice of factory farming, particularly large animals such as pigs and cows”.

The resolution, proposed by the Dilton Marsh branch in Wiltshire, goes on to urge the government to “ensure planning permission is not granted for such projects”.

If it is passed, the proposal will be come a mandate and will form the basis of WI campaigning in the coming years.

The resolution is a blow to the NFU, which has enjoyed strong support from the WI, particularly on its campaigns to help ailing British dairy farmers.

In 2007 the WI launched its Great Milk Debate, which saw 15,000 members join forces with the NFU to demand fairer prices for milk producers from retailers, processors and consumers.

Last November, WI chairwoman Ruth Bond launched ‘Mission Milk’, a campaign in partnership with the NFU to draw attention to the problems in the dairy sector.

The NFU said it was concerned by the wording of the resolution on factory farming, as it assumed poor standards of welfare, environmental pollution and degradation of the countryside, despite there being no evidence.

It warned the WI was capable of attracting national media attention which could lead to possible impact on future planning decisions and called on farmers to attend regional WI debates to “encourage constructive discussion” about large-scale production systems.

To help farmers, the NFU has also created notes and presentations for farmers to take to meetings so they can get the facts across.

“We have welcomed the WI’s support in a number of campaigns on the dairy industry, but the resolution is disappointing.

“It’s important that the discussions are based on fact and not myths, so farmers need to be at the front and centre of these debates to get the truth out there.

“Farming is changing and large-scale farming will be a key issue we will have to contend with over the next few decades.”

NFU president Peter Kendal will speak on behalf of the industry at the WI’s AGM later in the year, where WI members will debate the topic before voting.

To get a copy of the large-scale farming presentation, contact your local regional NFU office or email the union for a copy.

What do you think about this proposed WI resolution? Do you think it is a good idea or misguided? Have your say – and read what others are saying – on the forums.