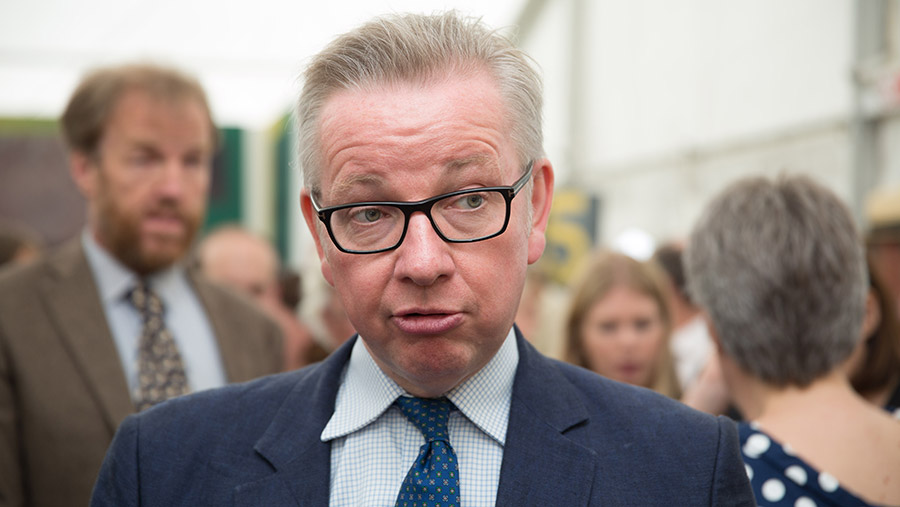 Defra secretary Michael Gove has pledged “open and frank dialogue” with farmers as the government develops its post-Brexit agricultural policy.

Mr Gove was speaking to farm leaders and fellow parliamentarians during an NFU reception at the House of Commons, London, on Tuesday (20 June).

It is vital the industry and government work together honestly and effectively as new policies and support systems are devised for the agricultural sector, he said.

“One thing will be critical – and that will be open and frank dialogue,” said Mr Gove.

“I have never known a farmer who has been reluctant or shy in coming forward with suggestions about how politicians might do their jobs better.

“That is how I like it – I want to make sure that over the course of the next two years we have an open debate and you tell it as it is.”

Mr Gove added: “It is important that you explain to me exactly what it is that government has got wrong in the past, may get wrong in the future and needs to alter.”

This included overly burdensome bureaucracy, delays to support payments, problems that could be quickly resolved and detrimental policies that may take longer to change.

Pledging to be an “energetic champion for British farmers and producers,” Mr Gove said Brexit was a historic opportunity to “reset” UK agricultural policy.

“For more than 40 years, the EU has dictated exactly how agriculture and fisheries in this country are governed, supported and shaped,” he said.

British farmers deliver the highest-quality produce in the world. It deserves to be enjoyed by an expanding global market, as well as by domestic consumers, he said.

“The beauty of our countryside and the health of our agricultural sector depends on the committed hard work and unseeking dedication of those who are Britain’s farmers.”

In turn, said Mr Gove, this depended on people in government having an understanding of the opportunities and challenges faced by farmers.

Mr Gove said he wanted to ensure the “tremendous opportunity” as the government took back control of farming policy was exercised in the interests of British farmers.

“We have an opportunity to get rid of bureaucracy, but at the same time enhance our environment,” he told listeners.

“We have an opportunity to move away from an inefficient form of subsidy to providing the right sort of support for farmers.

“We also have a fantastic opportunity to make sure that the world-beating record we’ve got – of high-quality produce and environmental standards – is recognised globally.”

NFU president Meurig Raymond said the role of parliamentarians in the future of British agriculture as the UK left the European Union could not be overstated.

“This will be the first Westminster parliament to legislate on agricultural issues for more than 40 years,” Mr Raymond told MPs and peers.

Turning to Mr Gove, Mr Raymond said: “The challenges ahead of us are great, but so are the opportunities. The NFU looks forward to working with you all to back British farming.”