In an unprecedented cross-continental collaboration the views have been gathered from farmers in every corner of the world’s biggest agricultural economies.

Working with six leading international farming publications, the poll, hosted on FWi, has drawn votes from respondents ranging from extensive sheep ranchers in Australia to intensive pork producers in Holland.

From the rugged upland peaks of Scotland to the vast cereal plains of Canada and the US Mid-West, those tasked with the responsibility of producing the food for the world’s burgeoning population – the farmers themselves – have finally had their say on how it should be done. And it’s a resounding vote in favour of innovation with 37.1% opting for new technologies and genetic modification (see right).

These percentages reflect splits in the opinions of farmers in different nations – new technologies and GM did not receive quite such a clear lead in the UK. The strongest support for this option was seen in the USA and Canada.

The Canadian farmers also strongly advocated the removal of trade barriers. Meanwhile, there was barely a single vote in favour of government intervention from Australia and New Zealand, whereas Dutch farmers expressed their support for education and training.

The result throws open the debate on GM – should we embrace it as a sustainable solution or beware the technology that may yet turn out to have hollow promises?

“It’s the same whether it’s a farmer in East Anglia or East Africa. They want to try new technologies, to adapt them and to move their farming system on.”

Greater access to GMs is crucial, he believed. “We need to rack up food production without putting our resources in jeopardy.

“We can’t use the business-as-usual model. And allowing farmers access to innovation in some parts of the world and not others is not helpful.”

And GM technology will become pivotal as the world grapples with climate change, he added.

“We’ll see more volatility in world markets and that’s the last thing farmers need. The tools to grow in marginal conditions, with access to the best plant protection products and technologies built into the seed to underpin a decent yield – these are the factors that will deliver reliable productivity and more stability as the climate turns more challenging.”

Much of the world’s existing food supply comes from areas on a climate-change knife-edge, Mr Little pointed out.

This means opportunities for areas, like northern Europe, predicted to be less affected. “UK farmers will have to produce not just more, but much more as this ‘perfect storm’ takes hold.”

The Soil Association‘s Patrick Holden agreed that innovation held the key, but he believed entrepreneurial flair and keener husbandry skills would show the way forward, rather than a reliance on one technology.

“Feeding the world sustainably is the biggest challenge facing not just farming but the whole of humanity. All barriers must fall aside as we work together to seek solutions. But that doesn’t mean we shouldn’t debate the issues.

“With Roundup-ready maize, canola and soya grown the world over and GM alfalfa close to approval, a frightening proportion of global food production is now in a monoculture,” Mr Holden said.

“In biodiversity terms it is an unfolding catastrophe. In terms of choice for the farmer, most are on a GM treadmill they cannot get off. And how vulnerable is the world’s population now that it relies on so few species to provide its food?”

He advocated the only truly sustainable farming system as one that doesn’t rely on nitrogen fertiliser or chemicals to maintain production. “We need a change of mindset to wean us off our dependency on cereal-based systems and monocultures and allow a greater role in our diets for vegetables and red meat.

“By all means we must welcome the best use of technology to ensure we can exceed current levels of production – hybrid seed and mechanisation are just two examples that have made a massive difference in the past. But it is so dangerous and delusionary to believe GM will solve the world’s food problems.” 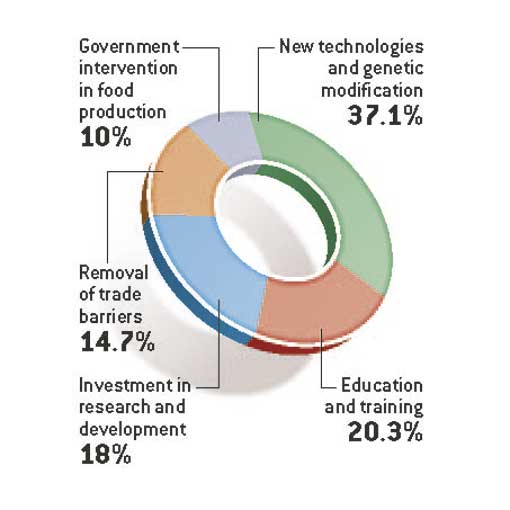 Maybe the challenge of feeding the world won’t be met by the US corn belt, nor will Europe’s livestock sheds meet a growing demand.

UN estimates of world population growth show head count in Africa set to almost double over the next 40 years and the Asian population alone will swell by an extra billion.

Perhaps the extra demand will be met by building productivity on a local scale.

“Whenever farmers look to raise yields they often look first at the seed,” Mr Little said. “We’re involved in that process, whether it’s in the developed or emerging economies.

“Technology and innovation are part and parcel of this and, for every £10 we make in sales, we invest £1 in finding a better product. But we also make sure we give the training and technical back-up so that farmers make the most of that technology.”

Congratulations to Cynthia DuVal, from Enumclaw, Washington State, USA, who won tickets to the world cup in South Africa. Her name was drawn from more than 10,000 entries to the free prize draw that was sponsored by Bayer CropScience.

“I don’t believe that any one of these strategies will have the impact that we need to have to feed the world,” she said.

“The challenge is a failure in human thinking and the recent tragedy in Haiti underscores the point. The world looked on as thousands of people suffered from lack of medicine, food and water despite the fact that it was stacked up at the airport in huge quantities not far away.

“There are human behaviour issues that are being ignored in favour of logistics and technology.”

Ms Duval is a director of a research centre in the Pacific north-west of the USA and is studying small farm lifestyles.