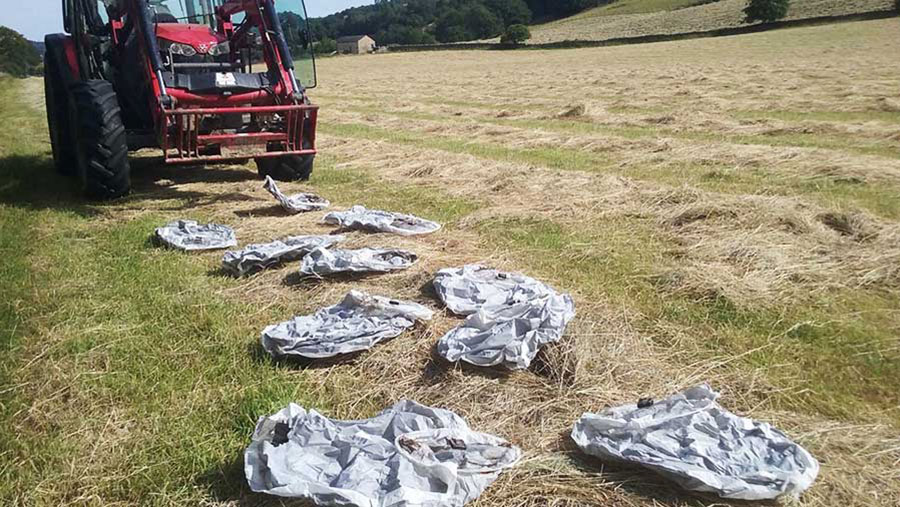 Some of the lanterns in Mr Stone's field © Martin Stone

A Yorkshire farmer has called for a ban on sky lantern launches after 11 landed in a tinder-dry hay field on the hottest day on record.

Martin Stone farms near Bingley, in West Yorkshire, and found the lanterns among mown grass on 19 July as UK temperatures broke the 40C mark for the first time ever.

The Met Office Fire Severity Index was set at its highest level of “exceptional” and the field was close to stored hay and machinery said Mr Stone, who expressed disbelief at the thoughtlessness of the individuals who released the lanterns.

See also: Business Clinic: How can I reduce risk of harvest farm fire?

“The hay was dry, in rows and ready to be baled on one of the hottest days ever, in very dry conditions.

“If the hay had caught fire from the lanterns with their bamboo frame, the wind would have quickly spread flames to other fields as well as our building half-full of hay and machinery. It would also have endangered nearby properties,” Mr Stone said.

“I find it inconceivable that people, without any thought, can let these fire bombs go into the sky without knowing where they will land or what damage they could cause,” he said.

“You wouldn’t throw a lighted match over the garden fence if you knew it could travel for miles, so why would you release these things? Today’s world is getting further and further removed from the farming and natural world,” he added.

Mr Stone reported the finds to the Country Land and Business Association, which has a long-running campaign calling for an end to sky lantern releases.

The organisation’s director in the north, Lucinda Douglas, said: “It is absolutely incomprehensible that sky lanterns are released, especially at this time of year – it is like fly-tipping fire at random.

“An increasing number of local authorities are banning the release of lanterns from council-owned land. We hope the government will take note of a growing desire to see the use of these ‘flying bonfires’ banned outright.”

Ms Douglas added: “In the past, we have witnessed the devastating impacts wildfires fires can have, both on rural communities and farmers, as well as scarring the landscape and destroying wildlife.”

She encouraged farmers and growers to keep fire extinguishers close by and place water bowsers in strategic places around their fields in a bid to protect themselves should fire break out.

Meanwhile, an NFU petition calling for a ban on sky lantern releases is closing in on a 50,000-signature target.

The petition, just 2,400 signatures short of the 50,000 mark, wants a total end to sales of lanterns in England and Wales.

The union pointed out that 200,000 lanterns are released each year and have caused house fires, animal deaths and destroyed land.