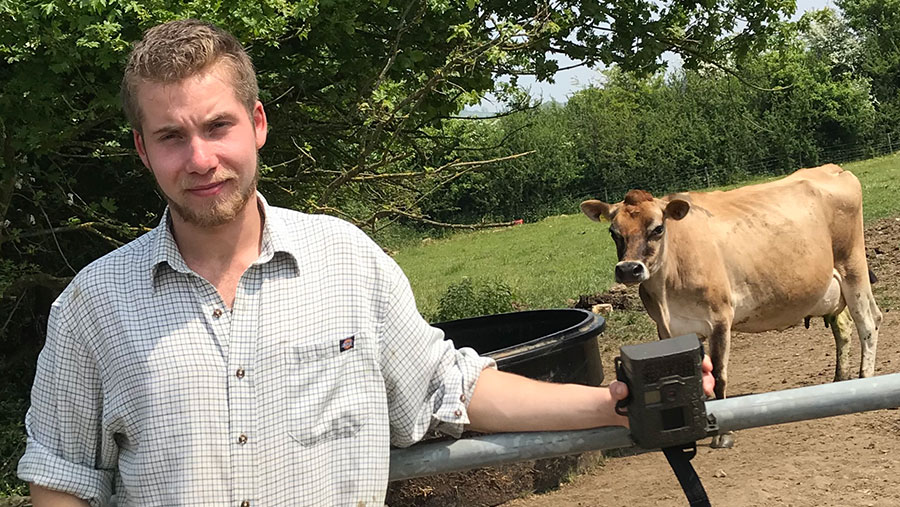 A dairy farmer is appealing to the public to help identify a shameless woman caught on camera appearing to fly-tip on his land.

Joe Tucker, 19, installed a small camera in a hedge at a fly-tipping “hotspot” by the roadside of his farm in Banes, near Bath in north-east Somerset.

The infrared, battery-operated camera, which Mr Tucker bought on eBay for £70, was placed inside the hedge at a spot which has suffered from fly-tipping incidents on previous occasions.

The camera was unable to record the vehicle’s registration number.

The woman nonchalantly removes a large plastic bag and chucks it by the hedge.

She returns to the boot to fetch some old wooden garden border fencing, which is also dumped.

Finally, the woman presses the button to close the boot and gets back in the car.

The discarded bag was stuffed with bark, old black roof felt and several other bags tucked together.

The woman has short, brown hair, which is greying. She is wearing a blue rain jacket with a distinctive orange zip and dark blue trousers.

Mr Tucker has posted the video on his Facebook page in a bid to identify the woman. It has been viewed more than 272,000 times and shared more than 10,500 times.

Members of the public have contacted Mr Tucker to offer a name for the woman who they believe is responsible.

“We were really shocked that a respectable, middle-aged woman would think it is acceptable to commit a fly-tipping offence like this,” said Mr Tucker.

“The reaction on Facebook has been amazing. It’s not just farmers who are upset, but member of the public have posted messages to say they are disgusted.

“It is not right that people think it’s OK to dump their rubbish in the countryside. People need to know that this sort of reckless behaviour is totally unacceptable.”

It is not right that people think it’s OK to dump their rubbish in the countryside. People need to know that this sort of reckless behaviour is totally unacceptable Joe Tucker, Dairy farmer

Mr Tucker says local environmental council officers have seen the video on social media and have asked him to send it to them. He also plans to forward the video and the name of the suspect to police.

“I think she should be punished for her actions. People need to realise they cannot get away with ruining our beautiful countryside,” he added.

If you have any information on this incident, contact the newsdesk on 020 8652 4905 or email philip.case@reedbusiness.com.