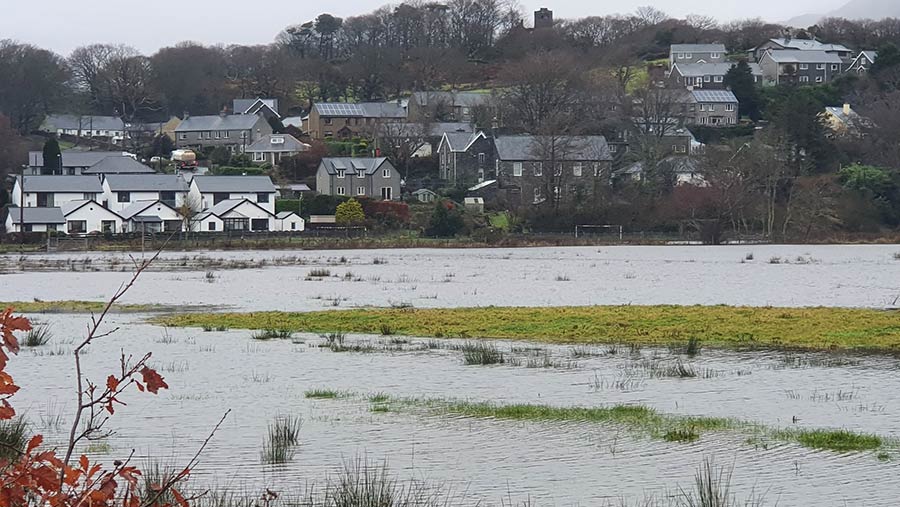 Farmers in Wales have blamed a lack of river maintenance for the flooding of thousands of hectares of land, and said Natural Resources Wales (NRW) was asked to carry out work on several occasions.

The farmland at Llanfrothen, near Porthmadog, in Meirionnydd, has been submerged after the river Croesor overflowed.

The Farmers’ Union of Wales (FUW) said NRW had been told that the river needed to be dredged and trees and branches removed to help water flow, in a series of site meetings after flooding in July 2020.

See also: Why government needs to listen to farmers for flood strategy

The union said the river Croesor is the responsibility of NRW and the environment body had failed to carry out maintenance work.

FUW Meirionnydd county executive officer Huw Jones said: “Flood banks in urgent need of repairs were also shown, with a request that a detailed inspection is carried out as soon as possible, with a view to making repairs as soon as possible.

“We gave a clear warning that doing ‘nothing’ was not an option.

“It is abundantly clear that the capacity of the river Croesor has been significantly reduced due to the fact that it has not been dredged regularly.

“It is understood that, years ago, dredging would be done every few years, but the position now is that this has not been done for decades, so we have silt building up on the river bed.”

Mr Jones added that the continuous flooding was damaging wildlife habitat and biodiversity in the area.

Frustrated farmer Glyn Griffiths, who has land near Llanfrothen, said it was disappointing promises were not kept.

He said: “The Land Drainage Act 1991 and Water Framework Directives show clearly that NRW has a statutory responsibility as the drainage board to maintain and improve the drainage within the district.

“We must now arrange further meetings, investigate and explore fully what the legal obligations are here, and whether NRW have been in breach of their duty of care.”

“In the past six months, we have cut weeds along 27km of ditches in the Llanfrothen area and desilted a further 500m to manage water levels, improve land drainage and reduce flood risk.

“Working with the Brondanw Estate, we have surveyed trees that are causing pressure points along Afon Croesor. A plan is being drawn up to remove trees that may be hindering the flow of river water.

“However, we can’t stop all flooding from happening. As climate change intensifies and we experience extreme weather events – including more intense rain – flood risk management will be an increasing challenge for the years ahead.”