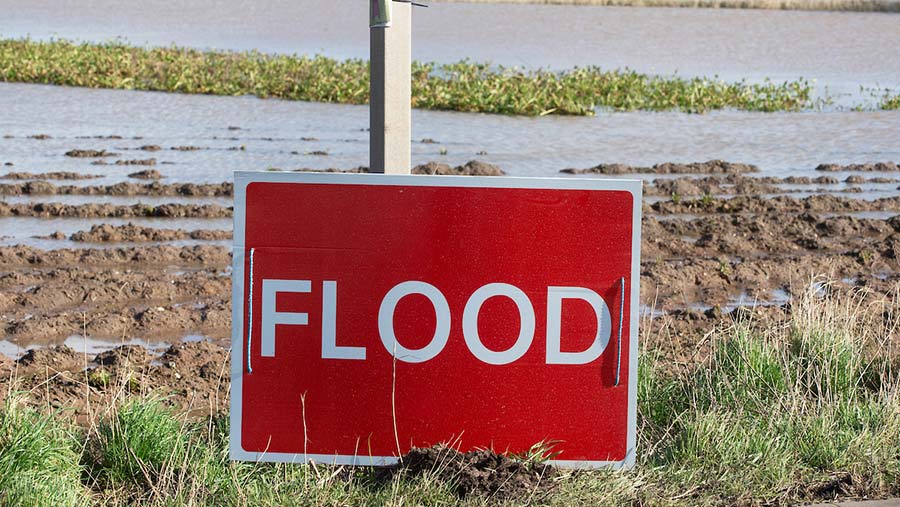 Farmers could have a key role to play in helping reduce flood risks faced by UK communities – but only if the government puts its money where its mouth is, say industry experts.

As the UK continues to grapple with the effect of widespread flooding, it is clear that a new national strategy is needed to help businesses and communities cope with increasingly frequent extreme weather events.

Farm leaders say this should include a mix of natural flood management measures – including changing the way land is managed so it can absorb more water – and engineered solutions, such as storing floodwater on farmland away from villages, towns and cities.

The NFU set out its proposals for the government to improve flood mitigation in a flooding manifesto in 2017. Although the document was well received, few, if any, of its recommendations have been implemented.

“Nothing has changed and I think that is the main frustration for farmers across the country,” says NFU national flood risk adviser Mhari Barnes.

“Defra and the Environment Agency said they agreed with many of our proposals, but nothing has happened.”

Farmers are willing to adopt natural farm management measures – such as “leaky dams” of fallen trees and branches that slow the flow of water, silt and sediment downstream – but they need assurances about the ongoing maintenance and liability of such schemes.

“If you put in leaky dams, and they work and are doing well, that’s fine,” says Ms Barnes. “But if the timber rots and it is transported downstream, where it blocks a culvert leading, to increased flooding, the liability is with the landowner. That is a massive issue.”

More landowners would adopt natural flood management measures if water management legislation was changed to ensure they are safeguarded in such an eventuality – especially as such schemes benefit communities downstream, rather than the farmer implementing them.

Ian Moody, technical manager at the Association of Drainage Authorities (ADA), agrees that the government should adopt a longer-term outlook in relation to water and flood management – and support it with adequate investment.

“The government needs to sit up and take notice,” he says. This winter has been wet throughout – and has included a number of extreme weather events. This means already saturated catchments are flooding because water has nowhere to go.

“We are going to see more of this in the future,” says Mr Moody.

Alongside natural flood management measures, the ADA favours hard flood defences around towns and cities where necessary, and convergence work within those channels, including targeted dredging and the clearing of vegetation.

Mr Moody believes the UK could learn from the Netherlands, where a major scheme called Room for the River has improved flood management.

The scheme worked by relocating dykes, lowering the floodplain and increasing the depth of side channels (see: “Case study – Dutch scheme makes Room for the River”).

“Large-scale flood water storage on farmland could be an option, but it is about getting the incentives right,” says Mr Moody.

This means controlled storage, with the farmer compensated in right way, and without taking land out of production for large parts of the year.

A water management project in the Netherlands is managing flood risk by allowing Dutch rivers to expand naturally during periods of high flows.

The Netherlands is one of the most densely populated countries in the world, and more than half of it is below sea level.

Flood protection is therefore a very high priority for the Dutch government, which started planning the Room for the River programme in 2007. 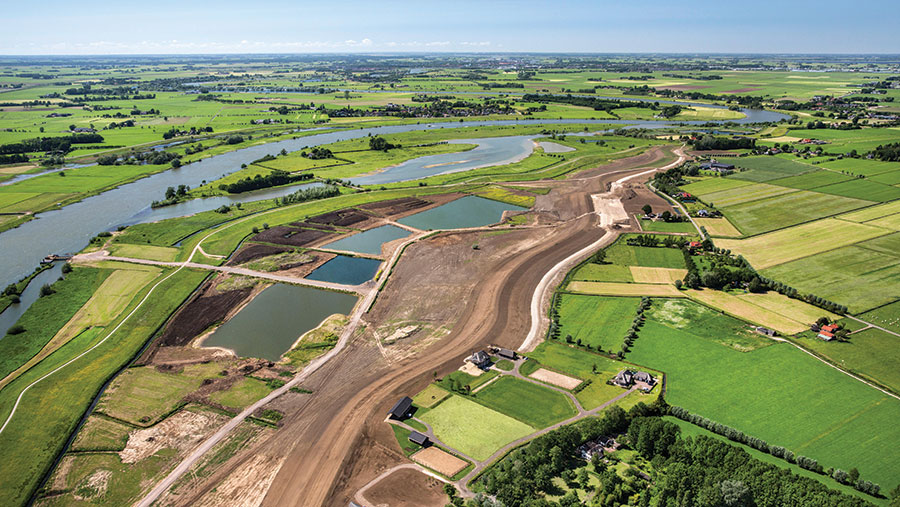 The €2.3bn programme has seen natural floodplains restored in places where it is least harmful to protect areas that need to be defended.

At Lent, on the river Waal, a water-holding dyke was moved 350m inland. An ancillary channel was dredged in the floodplain to help drain the river during extremely high water.

This in turn has created better flood protection for the area behind the dyke.

Washlands like this should be accompanied by broader flood mitigation measures – rather than a sole focus on agriculture, believes Country Land and Business Association director general Sarah Hendry, who was formerly Defra director for floods and water.

“We need the government to recognise that a range of things are contributing to flood risk – including infrastructure, roads and the way that more of our landscape is being concreted over in built-up areas,” she explains.

Proper sewerage systems that can better cope with heavy rainfall would be a good start, Ms Hendry suggests. “I worry sometimes that there is a tendency to scapegoat people who manage the land rather than looking at the whole picture.”

Adequate compensation for farmers who store water is a must, she adds. The government has a tendency to focus on what happens to people’s homes – underestimating the value of farmland and its value in mitigating flood risk and to wider society.

For their part, farmers should consider working together to manage flood risk in the same catchment. “One farmer or landowner working on their own cannot do as much. We need to be working in clusters or groups and work on solutions at a landscape scale.”

The government is under increasing pressure to properly compensate farmers where agricultural land is flooded to protect nearby homes and businesses.

Long-standing washland arrangements should be reviewed, because climate change and population growth means farmland is being deliberately flooded much more frequently and for much longer than originally envisaged.

Land farmed by Mr Wynn includes the Witham Washlands, which extend to some 700ha south-west of Lincoln.

Under an agreement originally made in the 1980s, the washlands are to be flooded in perpetuity when required to protect the city.

“We are being flooded for weeks at a time rather than days – and much more often – and it takes a long time for the soil structure to recover,” says Mr Wynn

The washlands have been on alert for flooding six times since last June. “The whole scheme needs a complete review.”

Overall, though, says Ms Hendry, the hard truth is that flooding will happen with increased frequency and can’t prevented completely. In short, it is here to stay and we need to learn to live with it, mitigating its worst effects where possible.

“We perhaps need to have a more open and honest debate. If we want to carry on living and working in the same places, we have to recognise that flooding happens. That means a lot more investment in being able to recover and clean up afterwards.”

The Environment Agency will publish a new floods strategy later this year.

It will set out plans to prepare for and adapt to the risks created by climate change – including the impact on individuals and communities – and structural damage to property and infrastructure.

Defra secretary George Eustice told the recent NFU conference that the government had invested £2.6bn to better protect the country from flooding over the past five years and was planning a further £4bn over the next five years, including “nature-based solutions” such as natural dams and tree planting.

“The local River Wye has seriously affected farmers and local residents, with the biggest flood in over 100 years – up to 6m in places,” he says.

The irrigation lakes use 139,000cu m of water each season, while helping to protect local properties from flooding. 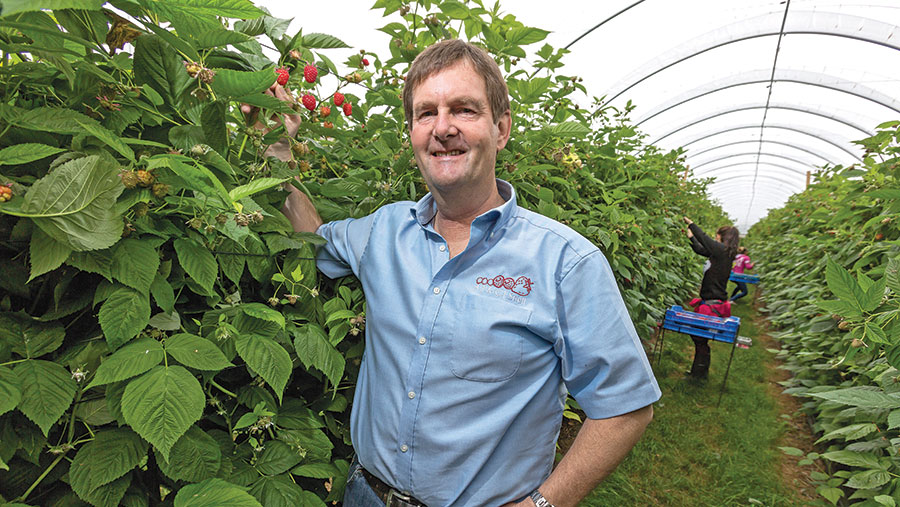 Mr Snell says his newest lake cost about £50,000 to build and about £40,000 in planning fees, because the council insisted he undertake a number of newt surveys and flood risk assessments.

“The planning application was slow and costly – it is a lot of money.”

The government and local authorities should support farmers who want to put in irrigation lakes, he adds.

“They have many advantages – preventing flooding by capturing excess winter water and reducing the need to abstract water for irrigation in the summer.”