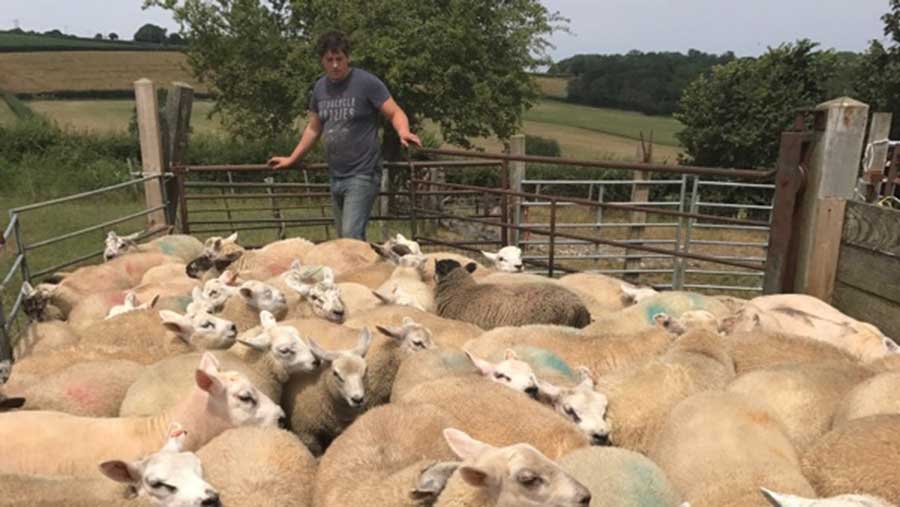 A farmer in west Somerset is stepping up security after some of his sheep were butchered and stolen from his field.

The flock at Steyning Manor Farm, near Bridgwater, was targeted overnight Saturday (24 June).

Farm manager Matthew Linford said rustlers drove across a field of grass in Adams Lane, Stogursey, which had recently been mowed for silage.

The rustlers made a hole in a hedge to gain access to the flock of Texel-cross breeding ewes.

Initially, the farm reported to Avon and Somerset Police that about five or six sheep had been slaughtered. But Mr Linford later counted his flock and found 17 were missing.

Some of the sheep were slaughtered in the field, dragged off and taken away in a van.

“We think they may have slit their throats in the field. The sheep were definitely not shot. They were bled out,” he said.

“There are big pools of blood and they have drained the sheep off in the field. It’s possible they killed all 17 of them and put them in bags.

“If you were to try to carry a live lamb out of a field, over a stock net, two strands of barbed wire and over a ditch, you’d think you would see more evidence of theft. Wool on the wire, or something.

“But all you can see is the drag marks. I think they put them in bags and dragged them out.”

“We have got friends who have had 50 to 60 sheep stolen in a box overnight. But knowing their throats have been slit in the field feels worse than having them stolen,” he added.

Neighbours said they did not see or hear anything. Mr Linford reported the incident to police, who gave him a crime number, but said there was not enough evidence to track down those responsible.

The theft will cost the farm around £1,700 in lost income. However, the insurance policy will cover the loss of some of the sheep.

A spokesman for Avon and Somerset Police said: “We had a report of a theft of five or six lambs on 26 June and the victim reported that there were signs of blood in the field.

“This incident has been passed to the Rural Crime Team who take livestock theft extremely seriously. We understand the impact of livestock theft on farmers and smallholders, it can be devastating.”

Anyone with information about this incident is asked to call 101 or Crimestoppers anonymously on 0800 555 111.