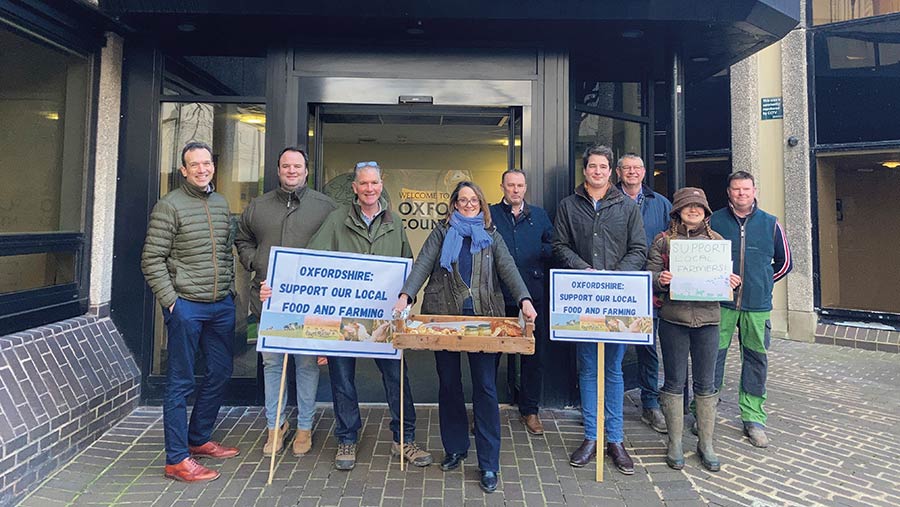 Farmers have rallied against Oxfordshire County Council’s plans to ban all meat and dairy products from its catering.

The motion by Green Party councillor Ian Middleton seeks to ensure that all council-catered events and meetings “are entirely plant-based” was passed at a full council meeting in December last year, though the final decision now rests with the cabinet, which meets on 15 March.

Oxfordshire farmers, producers and residents, angered by the attempts of the Lib Dem-Green Party alliance, said councillors are out of touch with their constituents and should use their voices to support the rural economy.

The original motion also called for the council’s school meal service to have plant-based menus available at least two days a week.

A group of farmers and rural residents gathered at County Hall on Tuesday (8 February) to demonstrate as councillors arrived for work.

The group handed out food from producers in South Oxfordshire – all of which would be banned from council events if the motion is ratified.

This included bacon from Red Lion Farm in Britwell Salome, sausage rolls made in Wheatley, and pastries from the Orange Bakery in Watlington, produced with eggs and milk from the area.

David Waters, a beef and arable farmer from Wheatley, said freedom of choice is important, but people need to understand where produce is coming from and how many food miles are being done to produce that food.

“We need to be looking after our local environment by eating locally and producing our food locally,” he told Farmers Weekly.

“This council is here to deal with all the problems that go on in the county, and one of the big issues is transport coming in from miles away when we could be producing more food locally.

“It has been very encouraging that councillors have come out, had a chat and had something to eat, because we bought some food along to give them a local choice of what we produce.”

Arable farmer John Richardson added: “We produce quality food and we think people should buy locally and seasonally and support their local farmers. We are working hard to look after the environment.

“Votes like this don’t help our cause and we are here to make a stand.”

An amendment to councillor Middleton’s motion, brought by Lib Dem councillor Sally Povolotsky, to “recognise the benefit of sourcing food locally from producers who follow sustainable principles” was passed at the December meeting.

“I am hoping that as many people as possible will lobby the cabinet between now and 15 March, and try to get them to abandon this crazy notion of compulsory vegan meals at all council-catered events,” he told Farmers Weekly.

Councillor Povolotsky said the decision had been made to help the council “reduce our carbon debt”, but insisted it was supportive of British farmers.

“This is about our commitment to looking at alternatives and we want to make sure the procurement of the food we eat here comes from our farmers.

“We’ve got fantastic organic farmers, we’ve got a great covered market just up the road. A lot of this is around procurement generally.”