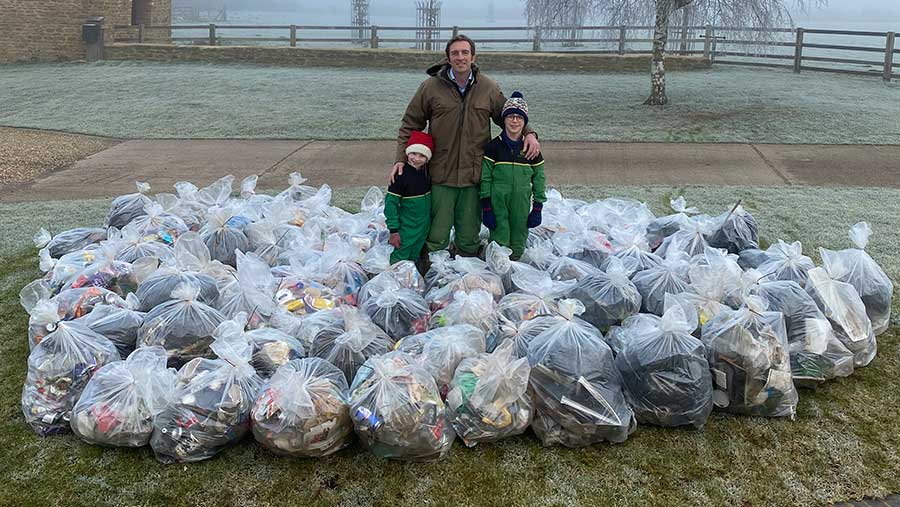 A farmer who exposed the litter epidemic blighting the countryside through a year-long rubbish collection campaign insists that manufacturers should pay the penalty.

Between March 2019 and March 2020 Joe Adams collected 64 bags of bottles, cans and food packaging along a two-mile stretch of the B4036 near Daventry.

Whenever he drove past litter in his John Deere Gator UTV, he would stop, pick it up and take it to his barn.

Mr Adams, with the help of his children Jessica, 7, and Henry, 8, spent a “mind-numbing” day over Christmas sifting through nearly 7,000 items of identifiable rubbish. They then compiled a list of company brands that were dumped the most.

Fast food and drinks manufacturers accounted for the bulk of the rubbish. McDonald’s was top of the list (1,495 items), followed by Coca-Cola (brands including Monster, Costa and Relentless) (672 items) and PepsiCo (including Walkers, Rockstar and Tropicana) (557 items).

Mondelez International (including Cadburys, Maynards and Bassett’s), Tesco, Mars, Nestle, Red Bull, AB InBev and Suntory (including Lucozade and Ribena) were in the list of the top 10 offenders.

He asked: “Is it really right that we should see their rubbish everywhere and individuals are footing the bill for cleaning it up?”

Mr Adams, a tenant and share farmer who farms 890ha of arable land and manages 200 ewes, said he would write to his local authority, Northamptonshire County Council, and propose that they should fine manufacturers for each item of litter they pick up.

“The fines would encourage the manufacturer to either clean it up themselves or find a way to link the product to the purchaser, possibly using a UV barcode on the packaging that gets linked to the purchaser’s bank card,” he said.

In November 2019, Cambridgeshire farmer Tom Martin posted a photo of McDonald’s rubbish dumped on his land.

Mr Martin, the founder of the Farmer Time initiative which aims to connect children with their food, said he wanted the fast food giant to help stop “the constant tide of littering”.

He suggested that companies such as McDonald’s should print car registration numbers on takeaway packaging to make people think twice before littering.