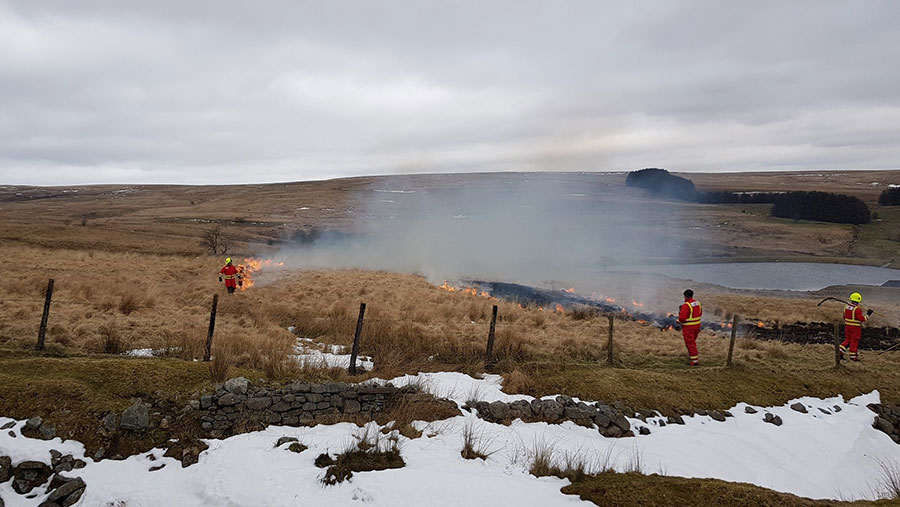 A new initiative between a Welsh fire service and farmers has been launched to help combat grass fires this summer following a spate of deliberate arson attacks.

South Wales Fire and Rescue Service is working with farmers and landowners to develop safe and effective “burn plans”.

To encourage this, it held its first partnership burn on farmland in the Rhymney Valley on Thursday (22 March) – an area heavily targeted by grass arsonists in previous years.

For example, in 2017, there were 80 accidental and 1,073 deliberate grass fires across south Wales.

It has become such an issue that a multi-agency task force, Dawns Glaw, has been established to educate landowners to raise awareness of the consequences of deliberate grass fires.

The thinking behind the controlled burns is that, by asking farmers to remove excess vegetation, the fuel load for fires will be reduced.

Del Llewellyn, landowner engagement  officer for South Wales Fire and Rescue Service, said farmers were mainly being encouraged to burn land with a high concentration of a purple moor grass known as molinia.

Often, due to the amount of grass and its density, livestock get no benefit from grazing this land, he said.

“These poorer species recover quickly from burning, and the new green shoots that appear is what the cattle like.

“This will encourage them towards this land and having animals on this area will keep the grass at a controllable level.”

Mr Llewellyn said controlled burning had benefits for both the farmer and the fire service.

He described it as a two-pronged approach – one won’t work without the other.

“The main reason for the danger aspect is that some areas have such large expanses of grass that there are no fire breaks for a considerable distance.

“If we burn and the farmer grazes in a mosaic pattern on his land then, when a fire occurs, we have a much better chance of stopping it spreading, which is both good for us and the farmer.”

The magnitude of a wildfire is determined by a number of factors, including the amount of fuel available to burn, he added.

“By removing this fuel, and working with farmers and landowners, this process can be done in a safe and controlled manner.”