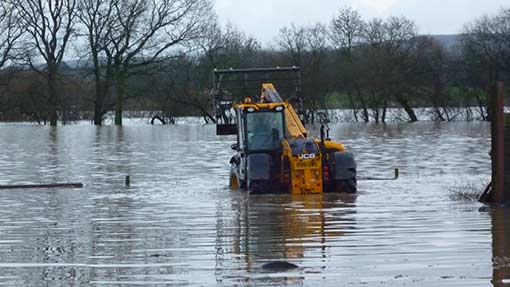 Flood-stricken farmers have been warned by insurance providers that recovery will be a “long haul” and may take at least a full growing season.

Rural insurer NFU Mutual said it was dealing with more than 8,000 claims for storm and flood damage since early December. It estimates its total claims bill will be £70m-80m.

He added: “The recovery will be a long haul, especially for farmers on the Somerset Levels, where floodwaters are not expected to get away for a long time.

“It will take six months to a year to get seriously flooded homes and farm businesses dried out. The big issue for farmers is seeing how badly damaged their fields and crops are.”

Somerset dairy farmer James Winslade’s farm has become a symbol of the flood devastation on the levels .

Counting the cost of flooding

Almost all his land at West Yeo Farm in Moorland, Bridgwater, is under water and 550 cattle were evacuated from the farm as floodwaters rose. And he fears £11,000 he spent reseeding grassland is money down the drain.

Although farms in Somerset have been worst hit, the devastation has not been confined to this region.

In Oxfordshire, flood-blighted farmer Tim Hook is facing a six-figure loss after his land flooded for the sixth time since 2008. He warned that many other farmers were facing similar devastation.

Six weeks of torrential rain at Cote Lodge Farm, in Bampton, has left about 162ha (400 acres) of crops under water.

Floodwaters will likely destroy about 121ha (300 acres) of wheat crops, which have been rotting under water since the farm flooded in December.

David Cameron visited Mr Hook on his farm in his Oxfordshire constituency last Friday (14 February) to see the problems.

He stressed to the prime minister the need for river maintenance works to resume, rather than the government just ploughing money into major capital improvement projects.

George Fenemore, an arable and sheep farmer, has 101ha (250 acres) under water at Clifton Farm, in Banbury, where pastures are damaged “beyond belief”.

“My house and barns are OK, but we’re lambing now and we won’t be able to turn out the lambs and ewes,” he said.

However, 58ha (145 acres) of North Church Farm has been flooded since Christmas Eve (pictured above). His farm driveway is flooded and he has to gain access via a neighbour.

He plans to sow spring barley and maize in the land over the next 12 weeks. But he is worried the floodwaters won’t have drained away in time.

“The River Arun hasn’t been properly dredged for some 20 years and, although we maintain our ditches well, the water simply cannot get out to sea,” said Mr Adames.

His neighbour, Robert Tedbury, a cattle breeder and beef producer, was forced to turn the calves out of a flooded building on to higher grazing land.

A 500m track is under 7ft of water separating the farmyard and a barn housing 100 cattle.

The cattle have been marooned on higher ground six times since Christmas. And Mr Tedbury has been using a canoe to paddle to his stock to feed them.

Berkshire farmer and Tory councillor Colin Rayner said all his riverside farmland has been “flooded out”.

Water levels at Berkyn Manor Farm in Horton were the highest he’s ever seen – and the highest since 1947 – after the River Thames burst its banks and spilled water on to thousands of acres of farmland.

“The water came down the river like a tidal wave,” said Mr Rayner.

“All our riverside farms have been under water, but the water is now slowly running away. It would have drained away quicker but for a lack of river maintenance over the past 50 years.”

Mr Rayner called on Lord Smith, chief executive of the Environment Agency, to resign for the “amount of misery he has put the Somerset farmers through”.

“The Environment Agency has been banging on that dredging doesn’t work,” he added. “If that’s the case, the Dutch have been wasting their time for the past 50-60 years.”

A Environment Agency spokesman said: “An independent  study carried out by engineering firm Halcrow has shown that the natural activity of the Thames removes significantly more silt than mechanical dredging would do.”