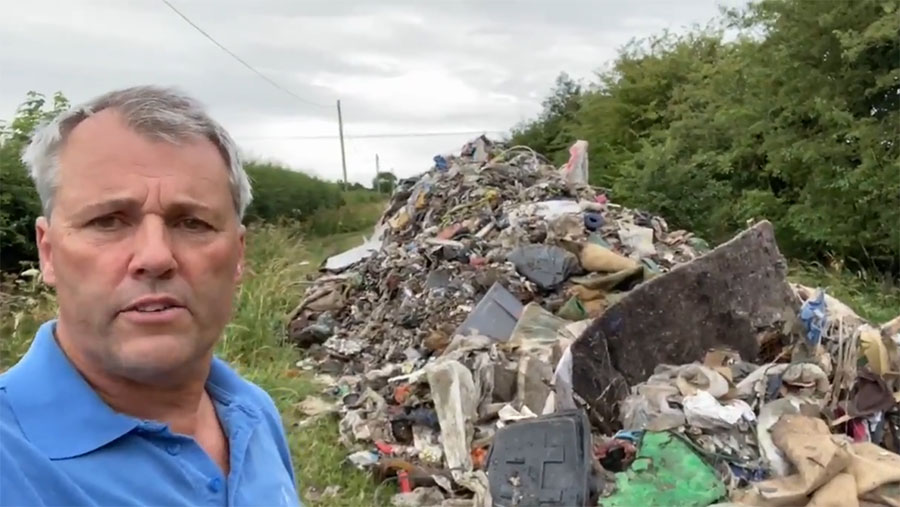 Lincolnshire farmer Andrew Ward is demanding tougher action from the government to punish fly-tippers after industrial-scale waste was dumped near his farm.

Forage Aid founder Mr Ward was left sickened after discovering a huge pile of commercial waste dumped in a country lane, blocking access to his fields on Wednesday (1 July).

He posted a video on his Twitter page (@wheat_daddy), showing a massive heap of 30-plus tonnes of household waste dumped on the rural track in Leadenham, near the A17 and close to the site of an operational commercial waste recycling centre.

“It’s just ridiculous that we have to put up with this type of activity in the countryside,” fumed Mr Ward.

“What on earth is wrong with people? It was dumped the night before. I wonder what goes through the mind of the driver of these types of vehicles, if they have a mind?

“This sort of thing is blighting our countryside, ruining the landscape and then having to deal with the dispose of is unreal.”

I apologise for boring you with yet another fly tipping video, I’m getting fed up of posting them as much as you are viewing them but this latest one is on a different scale. My MP, @drcarolinej can we have some action please, does the gov realise or care about this? 😡😡😡 pic.twitter.com/WuGOHbUrI5

Mr Ward, who farms 650ha of arable land near Leadenham, said farmers were getting frustrated with the government’s lack of action to tackle fly-tippers.

“The government don’t see this type of thing. This does not appear in London,” he added.

“They don’t understand. And I don’t know whether they care about what’s going on in the countryside.

“We don’t need words anymore, we need action. And our local MP, Caroline Johnson, please will you do something about this?”

Mr Ward said fly-tipping was happening all around his area and his video then switched to a second dumping of waste at a farm entrance to one of his neighbour’s fields at the side of the A17. The smaller dump contains asbestos material, which requires specialist handing.

“The rubbish here, a lot of soil, a child’s trike, toys, it looks like there’s a roof from a garden shed… someone must have seen this lorry being tipped at night,” he said.

The video has been viewed more than 68,000 times on social media.

Mr Ward, a former Farmers Weekly Farming Champion and Arable Farmer of the Year who was awarded an MBE for services to farming resilience in 2014, later posted another video showing him near the “horrendous” fly-tipped waste while taking part in a press-ups challenge to highlight awareness of mental health.

Mr Ward said people who carry out fly-tipping should be jailed or made to carry out community service, collecting their dumped waste by hand.

“The government should make sentences stiffer, allow councils to seize vehicles/lorries used in fly-tipping and crush them. Tips should be open more and made easier for waste to be processed, household and commercial,” he added.

A spokesman for North Kesteven District Council said its environmental officers were working with partners at Lincolnshire County Council and the Environment Agency on an inter-agency response to both fly-tipping incidents.

Each agency is responding in support of gathering evidence, investigating, arranging for its removal and safe disposal and an eventual prosecution.

Council leader Richard Wright said: “Any incidence of fly-tipping is a disgrace and a hazard, but to see something on the scale of that tipped at Leadenham Hill last week shows a staggering criminality beyond belief.”

The Countryside Alliance has reported a surge in fly-tipping incidents in the countryside since the UK went into Covid-19 lockdown at the end of March.

Although council household waste and recycling centres have reopened across the country, residents are being asked to book an appointment to dispose of their waste. Concerns have been raised that this has triggered an increase in fly-tipping.

A spokesman for the Country Land and Business Association said: “It’s utterly shameful to see this type of reckless behaviour continuing to happen on a regular basis across rural communities.

“Without better understanding from the public and the right legal deterrents in place, fly-tipping will continue to increase exponentially and further blight the countryside.”