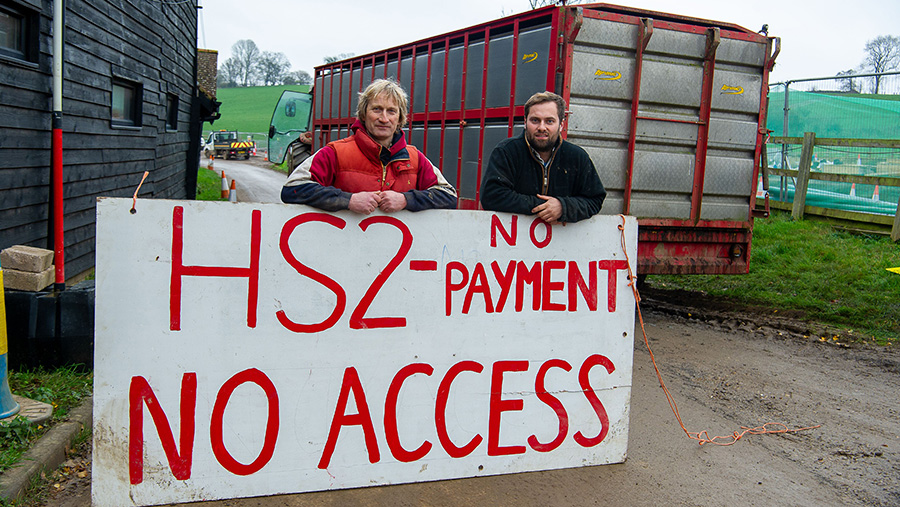 Simon Swerling and his family blocked worker access to the HS2 vent shaft construction for the high-speed railway outside their farm in Chalfont St Giles, Buckinghamshire on Wednesday (25 November).

The farmers parked a tractor-trailer across the route into their farm with a protest sign declaring: “HS2 – No payment. No access.”

Workers and delivery drivers in HGVs were backed up along the new temporary haul road from 6am until 9.30am as part of a peaceful protest before the farmers removed their tractor-trailer.

Enough was enough this morning for farmers in Chalfont St Giles as they blocked access to the #HS2 construction site due to non payment by #HS2 for loss of revenue #StopHS2 @stophs2 @NFUtweets @FarmersWeekly @Hs2Rebellion #farminguk pic.twitter.com/rn4s1UNFXD

For construction of the haul road, the farmers have had to sacrifice the use of their equestrian centre, which housed 35 horses and was used as a livery or part livery by horse owners. Railway construction workers moved on to the farm in February to build the temporary haul road.

The family farming business, GD Swerling & Sons, has yet to be paid compensation by HS2 Ltd – the company responsible for building the new high-speed railway – after submitting a claim in July for business interruption, and loss of earnings from being unable to use the strip of land and their equestrian stable complex.

The farmers say non-payment by HS2 Ltd, running into tens of thousands of pounds, is having a massive impact on cash flow.

“When HS2 came to see us nearly eight years ago, they said farmers, landowners and businesses would not be out of pocket over this project. Sadly, that is not the case,” Simon Swerling told Farmers Weekly.

“There are compensation monies due. We have been waiting for more than six months for the loss of income for our equestrian centre.

“This same story is happening up and down the country. HS2 acquires the land and there is always a stumbling block. The cash is not as forthcoming as you’d expect.

“Our gripe is not with the workers – nearly all 200 are fully supportive of us. It’s with the senior managers of HS2 who sit in their ivory towers in London and Birmingham.”

The farmers said HS2 bosses told them on 16 November that their case was being processed, but their solicitors are still awaiting confirmation that the compensation money will be paid. 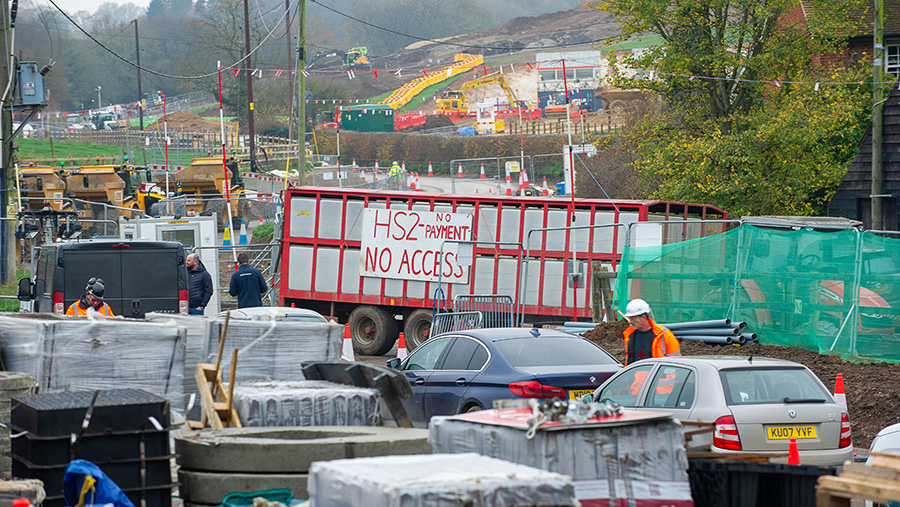 The Department for Transport (DfT) has recommended that HS2 Ltd should “introduce an option for compensation for crop losses to be made much earlier to farmers, with compensation made at the point where land is first taken into possession, rather than waiting for evidence of loss”.

The DfT categorises this recommendation as “essential in the short term” for farmers whose land is taken by HS2 Ltd.

Mr Swerling said: “The DfT’s recommendation is that when they go onto farmland, or if it’s anything to do with rural property, they should pay in full before entry. That’s the crux of our protest.”

HS2 Ltd previously paid GD Swerling & Sons for part of the earlier stage of construction. They then decided to acquire the equestrian centre building to continue construction of the trunk road, which bisects the property.

The Swerling family farm a 303ha mixed enterprise, which includes 450 Simmental cattle, 350 breeding ewes and 81ha of arable crops. They plan to continue farming the land after construction of the high-speed railway.

A spokesperson for HS2 Ltd said: “Our property team can confirm that the payment is already approved and that as of 25 November, we were just waiting for some paperwork from their solicitors. Assuming we get that, they will be paid very soon.

“This payment is on top of substantial payments that they have already received for previous land access claims.”