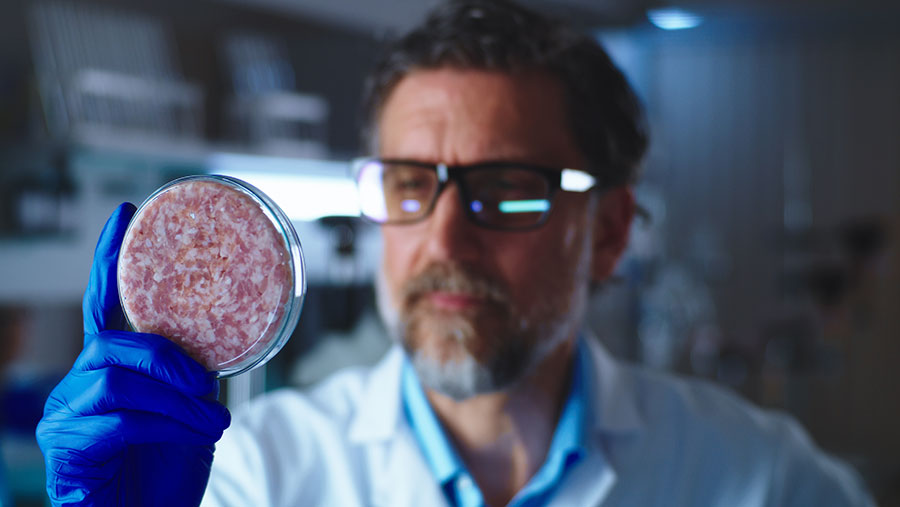 With just a voice command to a microwave-sized box, Star Trek’s Captain Kirk could instantly create any meal aboard the Starship Enterprise, leaving him more time to boldly go where no man had gone before.

I’ve not seen every episode, but no one so far has asked him what effect the rise of replicator technology had on Earth’s farming sector.

What was true in the fictional world of Star Trek is not yet true in real life, but since 2020, investors have apparently allocated more than £740m towards making lab-grown meat a reality.

While instant synthesis is still fully in the realms of science fiction, creating meat in stainless steel tubs from just a few harvested animal cells is already a reality at a very small scale.

Are the 80 start-ups working on this idea close to upending the agricultural industry?

Well, chicken produced in this way is already approved for sale to consumers in Singapore, and other products seem destined to go on sale shortly.

But some analysts say enormous challenges still lie between the firms attempting to sideline the meat industry and a mass-market reality.

Even if they may be close to producing multiple types of meat in this way, they are nowhere near close to competing on price.

The largest challenges are linked to manufacturing this product at the scale necessary to have it appear on every supermarket shelf.

The problems here are multi-faceted, interlinked and require significant scientific breakthroughs before they become close to reality.

This includes manufacturing in vessels at a scale that simply doesn’t exist yet, using incredibly scarce and high-cost ingredients to do so.

It led one peer-reviewed two-year study to conclude in essence that the costs of these two factors will always be too high for lab-grown meat ever to make sense.

It is true that some companies appear from nowhere and in a short time soar to valuations in the billions of pounds due to an unanticipated discovery.

Few motoring experts would have predicted at the turn of the century that Tesla would have a market valuation of more than one trillion dollars, making it four times more valuable than its nearest competitor, Toyota.

Yet for every world-dominating Tesla there are other firms that attract huge amounts of money and deliver little or nothing.

Theranos achieved a US$10bn valuation after claiming to have made a breakthrough in medical science that would transform the pace and accuracy of blood testing.

It was years before the company was found to have been lying about this, having duped many of the apparently savvy members of the investing community along the way.

No one is suggesting claims that meat has been manufactured in a laboratory is false – it’s done using a process similar to how vaccines have been produced for decades.

But I do wonder if, in their zeal to save the planet, too many investors are rushing into an industry beset by enormous challenges simply out of fear of missing out on an opportunity to burnish their environmental credentials.

In 1932, Winston Churchill wrote: “Fifty years hence, we shall escape the absurdity of growing a whole chicken in order to eat the breast or wing by growing these parts separately under a suitable medium.”

This prediction did not come to pass and, despite all the hype, I would say no one currently working in farming is likely to be too troubled by this tech during their career either. Long live the livestock farmer.