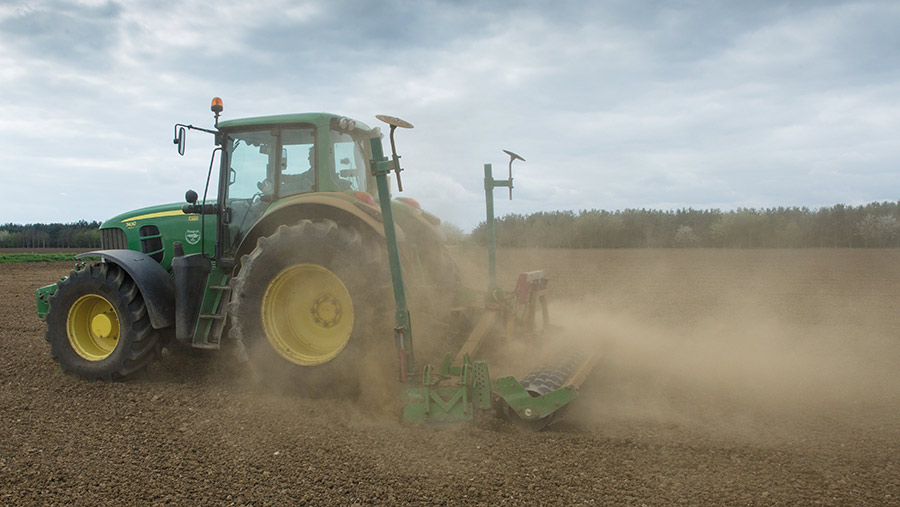 If the biggest part of farming chitchat could be measured, it would be best depicted as a pendulum that solemnly swings between a desire for rain and a desire for sunshine.

Right now, the lust for precipitation is so acute, the arc of the arm must be jammed at an almost horizontal position.

A few showers have fallen in some parts of the country and if it persists, then mere days after the whiff of petrichor has faded, we all know someone who will poke their head up and loudly proclaim a desire for sunshine to return.

The only upside to this concrete-like ground is that I’m sure many of you have managed to switch from wellies to boots a few weeks early.

Thoughts are turning to whether this month – one of the driest Aprils in 60 years – will be a soon-forgotten minor annoyance or the start of something more serious.

At this stage, the sight of grass turning purple and stunted crops is frustrating, but all just part of the farming experience.

We have the opportunity to mitigate some of the effects of a dry spell, but even less ability to make it rain when we want than Boris Johnson had to find a cheap decorator.

Countryside small talk, of course, relies on someone to talk to and the steady drumbeat of new technology is continually finding ways to replace a farmworker with a machine.

This week’s arable section has an update on the progress of weed-zapping robots from the Small Robot Company, which could provide a welcome alternative to sprays and sprayers, but perhaps be in the vanguard of a new wave of automation.

Farmers have been lamenting the decline of rural populations for almost as long as it’s been happening.

An erosion of staff from farms and a decline in people staying in the same area for their whole life means that whatever the countryside way of life meant, it’s fast disappearing as all of society becomes more homogeneous.

In search of an upside in all of this, I opened one of my farming history books at random (Tom Quinns’ Tales of the Old Country Farmers) to find an account of 1930s rural Yorkshire life.

Farmer John Elgey, the interviewee, described how farmworkers would accept a one-year contract at a hiring fair.

They received their full wages at the end of the year, with only board and lodging in the intervening period.

The 12 men hired to work on his farm used to sleep in one big bedroom, with two men to a bed.

Of course, in a world without a social security net, a roof over your head and food on the table were not to be sniffed at. But keep a picture in mind of being penniless while bunking down in a room full of burly ploughmen the next time you find modern life dispiriting.

There are, however, a few upsides to that era. Although I’m sure they had their share of loudmouths, at least they never had to deal with James Haskell.

The former England rugby player had his pants pulled down by farmers on social media this week after making some ill-advised comments about walking his dog off the lead.

Not everyone at the receiving end of a social media pile-on deserves it, but farmers were absolutely right to robustly raise awareness of all the damage free-roaming dogs can do in the countryside – even when no livestock are present.

Town and country have never rubbed shoulders more than in the past year, but they’re still often miles apart in outlook. There needs to be goodwill and an open mind on both sides to close the gap.