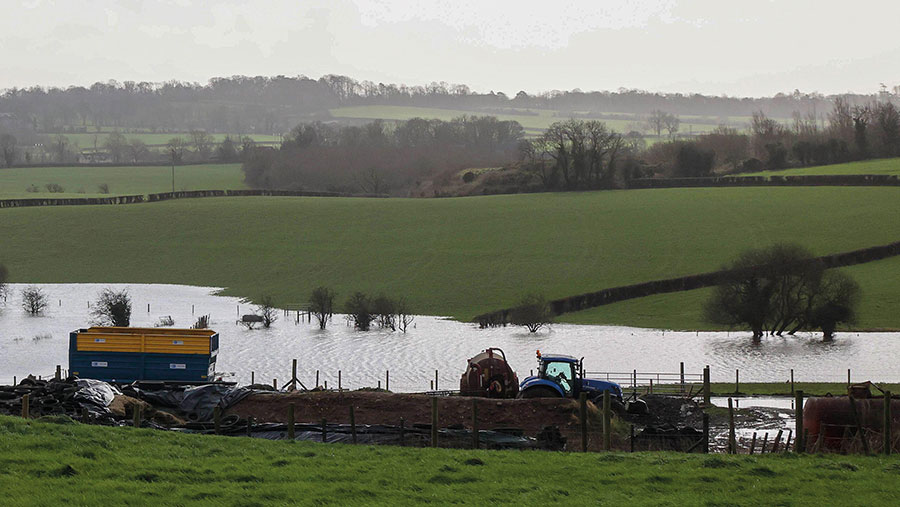 A row has broken out between farmers and environmentalists over claims that agriculture is to blame for the flooding that has impacted homes and businesses during the recent storms.

Ben Goldsmith, Defra board director and environmentalist, triggered an angry backlash among farmers online when he tweeted: “If you strip the hills of nature, drain the wetlands, fill in the ponds and turn all the little streams into dead straight drainage ditches then you get greater flooding downstream.”

If you strip the hills of nature, drain the wetlands, fill in the ponds and turn all the little streams into dead straight drainage ditches then you get greater flooding downstream. The science is simple. Nature recovery and flood/ drought mitigation are one and the same thing. https://t.co/hipPAYAFRm

Lincolnshire farmer Steve Elnor replied: “Where are you laying the blame? Farmers? Or post-war ag policy and grants that were a response to food self-sufficiency that was around 30% at the outbreak of WW2? Because the changes you mention haven’t really happened in the last 40 years.”

The Environment Agency says about 400 properties have flooded across different parts of England as a result of the heavy rain from Storm Franklin alone.

But Mr Elnor told Farmers Weekly that censuring farming practices for flooding was wrong, pointing out that the development needed to support a growing population, such as housing, roads and retail parks, all meant quicker run-off of rainwater.

“The flooding Ben Goldsmith linked to in his tweet was in Derbyshire. I know the area as my sister lives there and I can’t see that agricultural practices are very different to what they were years ago, certainly not in relation to the increase in flooding incidents,” said Mr Elson, of Mill Farm, near Grantham.

He accused Mr Goldsmith of antagonising farmers and suggested environmentalists needed to “take farmers with them” to achieve their goals.

A starting point, Mr Elnor believed, would be to recognise the “public good” farmers delivered when their fields were deliberately flooded to protect settlements.

That flooding can often lead to the loss of crops and, in some cases, fields can no longer be farmed, yet there is no government scheme to compensate farmers.

Land farmed by Richard Bramley, near York, flooded for the third year in a row last week as a result of measures to divert water away from homes.

It was the 13th time the farmland had flooded since 2000 – it was submerged just five times in the entirety of the last century.

Mr Bramley questioned why there was no financial recognition in the new Environmental Land Management (ELM) scheme to compensate farmers for storage of water during times of flood risk.

In Latton, north Wiltshire, land farmed by Liz Webster and her husband is again under water after the River Thames burst its banks.

Mrs Webster, who is the chairwoman of the campaign group Save British Farming, suggested that an absence of dredging had severely restricted the capacity of the river to hold water.

“The Thames has not been dredged for years, in parts it is less than half the width it used to be,” she said.

The practice of diverting water from the sites of new housing developments to rural regions was another contributory factor to the flooding on her farmland, including major building projects at Swindon, she believed.

“All the water backs up on the farmland here,” said Mrs Webster.

“We grow a lot of maize but we couldn’t harvest it the year before last because of flooding. There is a lot of risk in spending so much money and planting those areas.

“I am not anti-housing, but we need a more joined-up plan. Ben Goldsmith and Defra should be working to help farmers to produce food to protect the UK’s food security instead of making them a scapegoat for flooding.”

The Environment Agency (EA) says it recognises the risk to farmland from flooding – around 12% of agricultural land in England is at flood risk from rivers, the sea, or from both.

“That’s why we have taken action to alleviate these risks,” it says.

When used with other flood risk management measures as part of a catchment-based approach, the EA believes dredging and desilting can be effective and justified.

But, in the majority of cases, it suggests they are not the most efficient or sustainable ways of reducing flood risk and may actually increase flood risk to downstream communities.