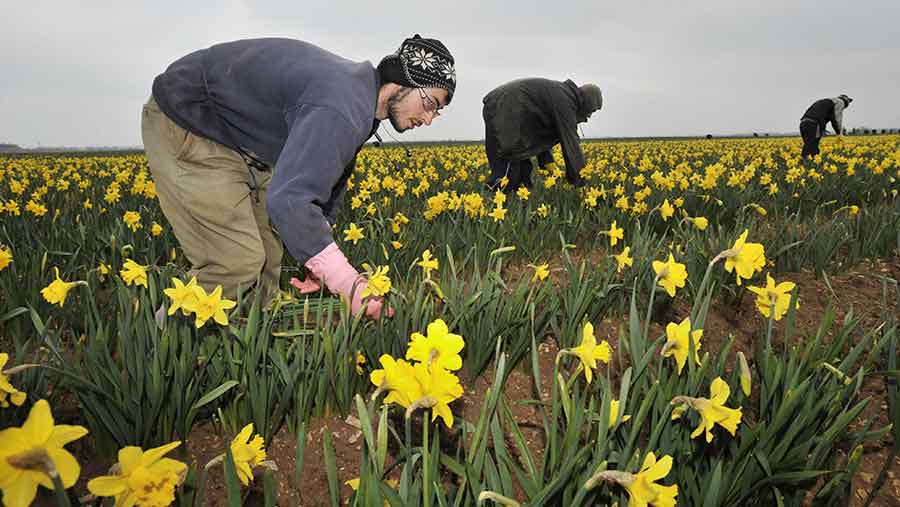 The government has rejected calls for a seasonal agricultural workers scheme (SAWS) so people from overseas can fill temporary job vacancies on UK farms.

As a result, the government would not introduce a seasonal workers scheme this year, he told the House of Commons environment, food and rural affairs committee.

The most recent labour market statistics showed 82,000 more workers had come into the UK from Bulgaria and Romania during 2016, said Mr Goodwill.

“At the moment, we do not believe there is a need for a scheme.”

Mr Goodwill rejected the suggestion by committee chairman Neil Parish that he was selecting the statistics that suited his argument against a seasonal workers scheme.

The number of workers coming into the UK from other central and eastern EU countries had also increased, said Mr Goodwill.

“We have seen increases, but particularly in those two member states, where large numbers of people come and work in agriculture,” he told the committee on Wednesday (15 March).

The government would keep the situation under review but there was not sufficient evidence to support calls for a seasonal workers scheme during 2017, said Mr Goodwill.

The horticulture sector currently employs 85,000 seasonal workers – but the NFU expects that requirement to rise to 95,000 people by 2020.

“The evidence for a scheme is clear,” she said.

John Hardman, director of Hops Labour Solutions, which supplies workers to the food and farming sectors, said he was unable to fill 300 vacancies last year.

The 2016 soft fruit season had been the first year in many that one of the UK’s largest recruiters had been unable to fill posts during peak times, said Mr Hardman.

“We anticipated the changes in the marketplace that we are seeing now, however, not at the speed or magnitude we are currently seeing, much of which is down to the Brexit vote.”

The industry had received mixed messages from the government with regards to a new seasonal workers scheme since the beginning of the year.

“It is quite clear that we won’t see anything in the near future and growers need to work on that basis,” said Mr Hardman.

Hops had seen a significant increase in demand for workers during early 2017 – particularly from farms that had been recruiting people directly.

Mr Hardman said: “The industry saw significant shortages from mid-July to mid-September last year – a situation that can only be exacerbated as we head toward Brexit in 2019.

“The government must realise that some succession planning is needed as we exhaust the current labour pool from Romania and Bulgaria.”