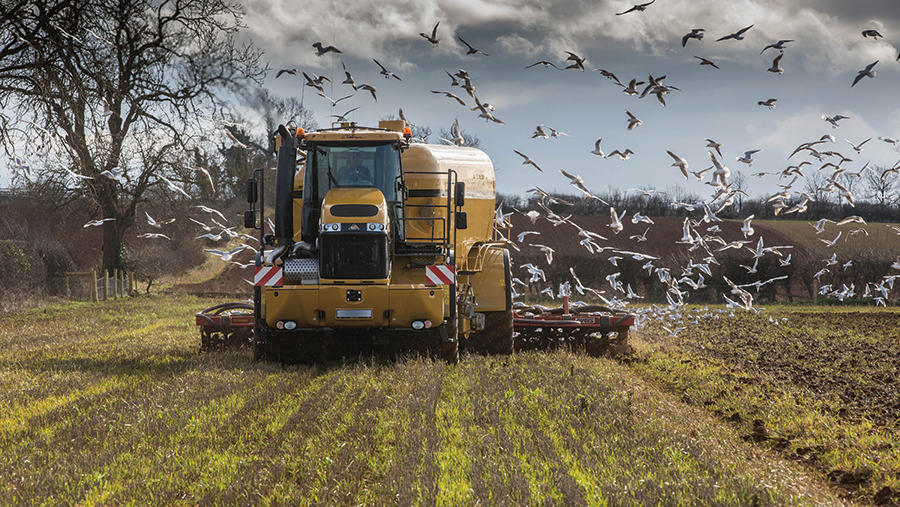 Stricter controls are to be imposed on fertiliser, manure and slurry applications under government plans to improve UK air quality.

Dairy and beef farms are among the sectors that will bear the brunt of restrictions as the government seeks to reduce ammonia emissions from agriculture. The proposals are contained in a draft Clean Air Strategy, launched by Defra secretary Michael Gove on Tuesday (22 May).

The government says air pollution is the fourth biggest threat to public health after cancer, obesity and heart disease. And it says concerted action is needed to tackle pollution from farming – which is responsible for 88% of ammonia emissions.

New fertiliser rules include injecting rather than spreading urea – unless applied with a urease inhibitor; incorporating manure within 12 hours of spreading; and injecting or applying slurry with a trailing shoe rather than spraying it on to fields.

Environmental controls will be extended to large dairy farms by 2025 under the plan – similar to the permits already applied to intensive pig and poultry units. Livestock buildings will face mandatory design standards and slurry stores and manure heaps will have to be covered.

Defra says farmers will be required to invest in the infrastructure and equipment necessary to reduce emissions – and supported to do so through a new system of public money for public goods, including an environmental land management scheme to be introduced after Brexit.

Primary legislation will be introduced following a public consultation which ends on 14 August. Mr Gove pledged: “We will work with businesses, farmers, industry and households to develop innovative new solutions to reduce emissions.”

The announcement came on the same day as AHDB Dairy, Dairy UK and the NFU presented a Dairy Roadmap 10th anniversary report showing that ammonia emissions from agriculture decreased by 19% between 1990 and 2015.

Defra’s plans to cut ammonia emissions on farms will create more regulation for farmers – the opposite of the government’s pledge to cut red tape post Brexit, the National Beef Association (NBA) has warned.

However, NBA chief executive Chris Mallon said it would be the additional costs to farm businesses that beef farmers would fear most.

“All I see is pound signs here. The reality is, we’re being brought down an environmental route that we cannot actually operate in and produce in.

“If we produce less and the price goes up, it might be good for the farmer. But how will this sit with the government and its cheap food policy?”

The Royal Association of British Dairy Farmers (RABDF) said Defra must introduce an earned recognition system to help dairy farmers cut ammonia emissions, if its plans to improve air quality are to have any chance of success.

“The most effective way of generating results from the dairy sector is through earned recognition; where we would see progressive farms rewarded for their actions and contribution,” said the charity, in response to Defra’s consultation.

The RABDF said ammonia has always been an issue in farming, but as a natural emission of livestock, its definition and the science associated with it must be made clearer to farmers in order to move forward.

“Defra must outline more clearly how these practices will contribute to its reduction through a series of tangible stats and facts,” it added.

What farmers are saying

“The dairy industry is coming out of a fairly big recession. If the government wants us to do all these things, they’re going to have to fund us. Either that, or consumers will have to pay more for their food.”

“There certainly isn’t enough money in beef to enable me to build a shed with concrete floor, effluent tank etc just to store 6-9 months of farmyard manure.”

“Defra has to regulate the market and extend the remit of the groceries code adjudicator to ensure an equitable share of available margins for farmers, so that we can fund investments that need to happen.”

“Any grants that are made available for equipment must be protected against significant price rises from the manufacturers as soon as the grant comes out.”

What industry is saying

NFU deputy president Guy Smith said a range of actions were needed to ensure farmers could retain the capacity to produce food while continuing to safeguard the environment. He added: “It is crucial that new measures support farm businesses to be productive and competitive.”

Country Land and Business Association president Tim Breitmeyer said any scheme must provide genuine incentives to support farmers making the changes. It should also provide flexibility and easy engagement for farmers alongside clear obligations for delivery.

But the Soil Association said the proposals failed to go far enough. It said they should include support for a wider shift towards more extensive livestock farming – such as organic grass-based production systems – with lower stocking-densities.

The proposals are in addition to the government’s £3.5bn plan to reduce pollution from road transport and diesel vehicles. Defra says the combined actions will reduce the cost of air pollution by £1bn annually by 2020, rising to £2.5bn annually from 2030.