Farmers will have until 2024 to adjust to a new system of agricultural support after the UK leaves the European Union under plans outlined by Defra secretary Michael Gove.

Speaking at the Oxford Farming Conference, Mr Gove said he envisages that the current system of direct payments will remain in place for five years after Brexit in March 2019 – although payments will be reduced for larger farmers.

Rather than payments based on land area, which Mr Gove said are “unjust” and encourage inefficiency, Mr Gove said it was his intention that farmers should use the five-year transitional period to adjust to a new system of farm support based on environmental measures. 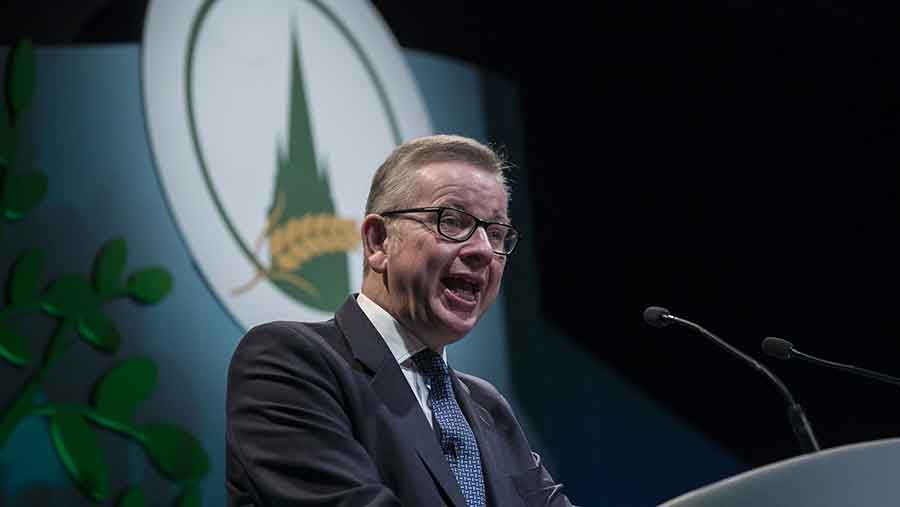 The need for change

“Paying landowners for the amount of agricultural land they have is unjust, inefficient and drives perverse outcomes,” says Mr Gove. “It gives the most from the public purse to those who have the most private wealth.”

Direct payments bid up the price of land, distort the market and create a barrier to entry for innovative new farmers. Change is needed to properly reward farmers who provided “public goods” by looking after the environment.

As well as supporting productive farming methods, the government wants to support what economists call the provision of ecosystem services.

Building on previous countryside stewardship and agri-environment schemes, the government is planning a new scheme accessible to almost any landowner or manager who wishes to enhance the natural environment.

This will include planting woodland, providing new habitats for wildlife, increasing biodiversity, contributing to improved water quality and returning cultivated land to wildflower meadows or other more natural states.

It will also make additional money available for those who wish to collaborate to secure environmental improvements collectively at landscape scale.

Mr Gove says he wants to simplify countryside stewardship so any farmer can complete an application in a single working day.

A simplified version of the scheme has already received a warm response. But Mr Gove wants to go further and develop a more responsive and efficient model – as well as reducing farm inspections.

A changed approach is expected to reduce inspections by making them more genuinely risk-based and focusing on limited areas – such as poor slurry management or inadequate animal welfare – where standards need to be improved.

Rather than simply badging food as British, a new approach to food labelling will create a genuine gold-standard metric for food and farming quality, says Mr Gove.

Lowering animal welfare or environmental standards in any post-Brexit trade deal would be foolish and undercut the UK’s reputation for quality, he says. Instead, success should come by competing at the top, not trying to win a race to the bottom.

This is likely to see a single, scaled, measure of how a farmer or food producer performs against a sensible basket of indicators, taking into account such things as soil health, control of pollution, contribution to water quality as well as animal welfare.

Mr Gove says the government has already held talks with a number of farmers and food producers about how such a scheme. “Outside the EU, we could establish a measure of farm and food quality which would be world-leading.”

The 2019 basic payment will be paid on the same basis as at present. And the government has guaranteed that the amount allocate to farming support – in cash terms – will be protected up until the end of this Parliament in 2022.

But basic payments to the largest recipients will be reduced. Mr Gove says he will decide following a consultation whether this could be through a straight cap at a maximum level – yet to be set – or through a sliding scale of reductions to the largest payments first.

The government will look at ways to support farmers who may choose to leave the industry as a result of the changes.

Continuation of Basic Payment Scheme payments will provide all farmers who currently receive them with a guaranteed income until 2024. After the five-year transitional period, BPS will be replaced with a system of public money for public goods.

“That guaranteed income should provide time for farmers to change their business model, if necessary, help to make the investment necessary for any adjustments and prepare for the future,” says Mr Gove.

Provided UK animal welfare, environmental and other laws are observed, the payment will be guaranteed. Inspections will continue but in the streamlined and risk-based fashion described after the UK leaves the EU.

The government has yet to commit to a replacement for the seasonal workers scheme (SAWS), which farm leaders say is vital to ensure access to overseas labour.

Mr Gove says it is important that the labour market “works effectively” – and he says that access to agricultural labour as well as a flexible migration policy overall as the UK leaves the EU. But he stopped short of promising a SAWS-style scheme.

The UK already has some of the world’s best performing farms – but agricultural productivity is lagging more widely. Mr Gove wants to boost higher productivity by encouraging more farmers to adopt best practice and new technologies.

This would include more investment in automation and machine learning – “moving from the hands-free hectare to the hands-free farm” – with automated, precision mapping of every inch under cultivation and targeted laser treatment of pests and weeds.

Mr Gove wants to better integrate research work undertaken by the most innovative institutions with the ongoing training those working on the land should receive – and plans to announce proposals to reform land-based education later this spring.

It was right, he said, that the Scottish government should have an opportunity to decide how to allocate the agricultural support for which it is responsible – and the UK government is committed to ensuring that funding across the whole of the UK was fair and reflected existing funding.

Scottish rural cabinet secretary Fergus Ewing subsequently welcomed the pledge that basic payments would continue for five years – but said further clarity was needed on a range of support schemes crucial to the wellbeing of Sotland’s rural communities.

Further details of the new policies will be published in a government consultation paper in the coming months. Farmers, industry bodies and other stakeholders – as well as the general public – will be able to have their say before the government formally presents its proposals in an Agriculture Bill later this year.