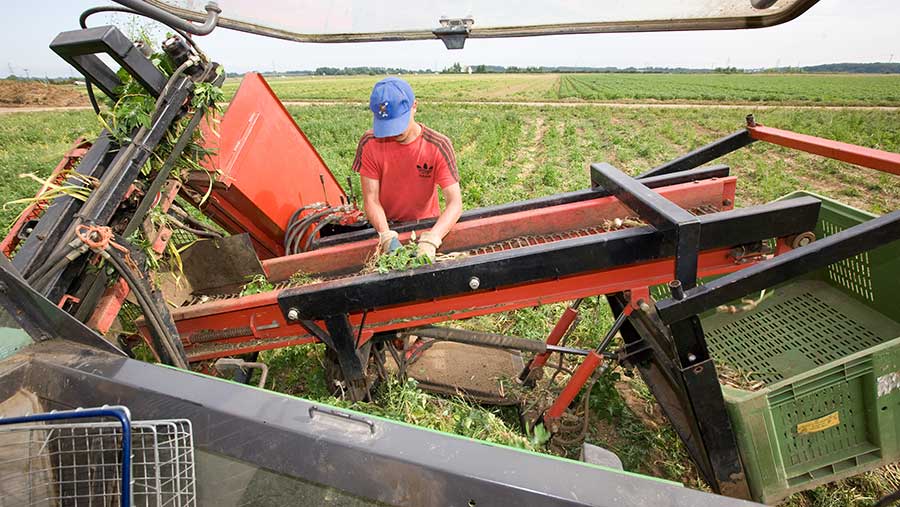 A major shortage of migrant workers to harvest crops this summer is being reported by UK farmers and food processors.

Findings from the NFU’s latest labour survey – due to be published later this week – are expected to confirm a shortfall in seasonal workers of up to 20%.

Ms Capper said: “We can say with some certainty that there has been a significant tightening of the labour supply in recent weeks compared with 2016.”

The shortfall was not affecting all growers – but others were being severely affected and taking action to mitigate the implications for their businesses.

Some migrant workers are staying away from the UK because the fall in the value of sterling since last year’s Brexit vote means they earn less money here.

Others are staying away because they simply don’t feel welcome.

Ms Capper said: “It is fair to say I am receiving daily phone calls from farms and labour providers that are very concerned about the situation.”

The NFU was lobbying the government for a long-term solution – but short-term plans were also needed, Ms Capper told the NFU Council meeting.

“We need to expose the risks from not having sufficient number of workers after Brexit.” she said. This  included unharvested crops being left to rot in fields.

But there was also a risk of growers disinvesting in UK production. Some larger-scale growers had already been investing overseas instead of the UK.

It was vital that government ministers addressed the horticultural sector’s concerns over labour as a matter of priority, said Ms Capper.

The NFU is calling for a system of visas and work permits so farmers and growers can recruit overseas labour after Brexit – as well as a “stable, clear immigration system”.

Any solution should impose minimum burden and costs on growers, while being attractive to overseas workers, it says.

Speaking at the Three Counties Show, Defra secretary Michael Gove said he would consult with all sectors about farmers’ access to migrant labour. And he was determined to make sure the industry had “access to the people it needs to stay economically ahead of the game” .